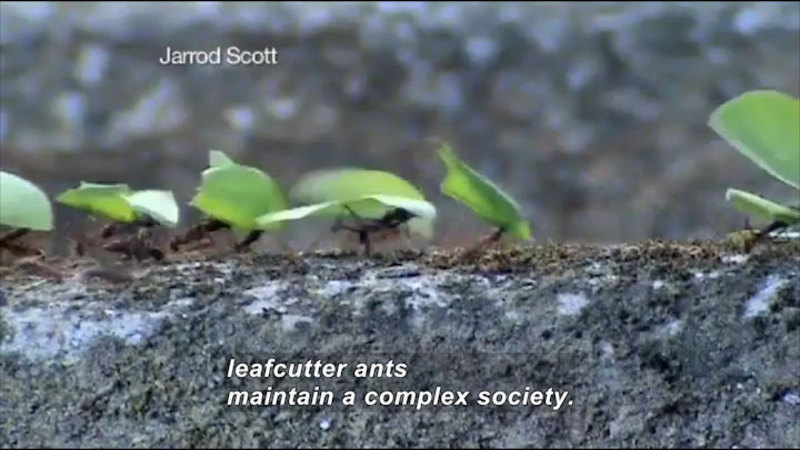 (male) The size of these soldiers is absolutely incredible.

They have formed massive colonies composed of potentially five to ten million workers, and they can defoliate a mature eucalyptus tree overnight.

(Describer) An ant tears a leaf.

Their mandibles are serrated like a steak knife to make cutting more efficient.

(narrator) These ants may be earth's first farmers. They don't eat leaves, instead utilize them to grow a fungus garden that becomes food and home.

(Currie) Here you can see a patch of chewed-up leaf material that is going to be integrated in the fungus garden.

(Describer) Some crawl on a finger.

(narrator) There's a third player in this symbiotic city-- bacteria on the ants' bodies that keep harmful microbes from damaging the fungus. She has this whitish coating on her body that is the antibiotic producing bacteria.

(Currie) These bacteria are related to the bacteria that humans get antibiotics from. We're discovering drugs from this system.

(narrator) These ants are not only farmers and pharmacists, they may help humans create cleaner energy.

(male) Leafcutter ants have been living on a cellulose diet for millions of years.

(narrator) Tim Donohue wants to know more about how ants break down cellulose. That could help create renewable biofuels from trees and other plants for our vehicles. They're a prime ecosystem that can be unraveled and tapped and learned from.

(male) Up here is where we have the foraging chamber.

(Describer) A small tree grows in a lab.

This is where we've installed fresh leaf material.

(narrator) Public display of leafcutters is a hit on the University of Wisconsin campus. So is the Ant Cam.

You can actually see some leaf material here. These are the fungal masses that are being cultivated.

(narrator) There's a lot we can learn from this tireless workforce. For Science Nation, I'm Miles O' Brien.

Leaf cutter ants could be called the overachievers of the insect world. They are farmers, medicine makers, and green energy producers. With support from the National Science Foundation, bacteriologist Cameron Currie studies the complex evolutionary relationships between the ants, the fungi they cultivate and eat, and the bacteria that influence this symbiosis. At the University of Wisconsin-Madison, Currie works with the Great Lakes Bioenergy Research Center on campus to explore how the ants manage to degrade cellulose. Her goal is to discover new ways humans might break down biomass into biofuels. The bacteria component of the ant colony could also help scientists develop more effective antibiotics for human health and agriculture.