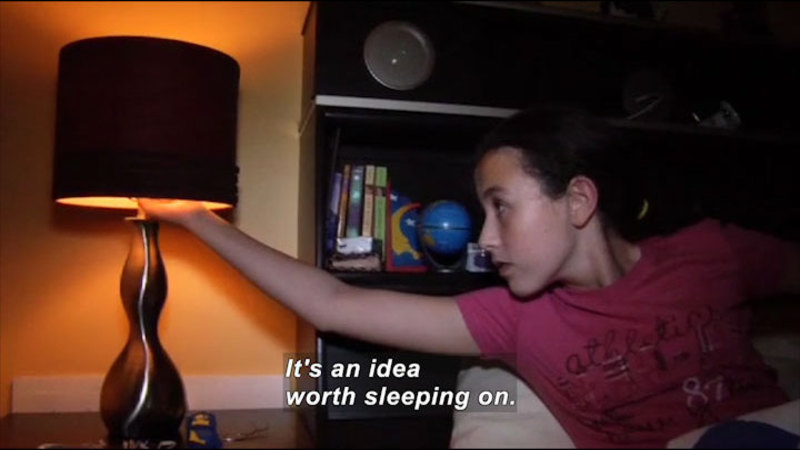 (Describer) About a dozen kids clap on a sidewalk.

(male narrator) We know kids need a good night's sleep to thrive. Those that don't get enough shuteye, well...

(female) They don't concentrate as well or perform well on tasks that are complex.

(narrator) Or even worse, they may be more likely to be depressed, sick, or obese. Sleep is important for brain development

and for emotional regulation.

(narrator) As it turns out, what sleep gives and what its lack takes away may be magnified by poverty.

(El-Sheikh) Poverty is a very major stressor for our children.

(narrator) With support from the National Science Foundation, Auburn University Psychologist Mona El-Sheikh and her team are studying sleep deprivation and how it impacts kids who are otherwise deprived.

(Describer) A boy approaches a bed.

(El-Sheikh) Before children come to the lab, we examine their sleep for one week.

(narrator) Using her own kids as test subjects, she demonstrates the many tests she's conducted on thousands of children in her lab. This actigraph monitors restlessness at night. Every one of the black lines are movement.

This would be an a example of a poor sleeper.

(Describer) Many black lines together.

(narrator) Team members attach leads to the children, monitoring how they react to stress. They watch for a faster heartbeat or sweaty palms.

(Describer) A boy listens on headphones.

(recorded female) We barely get anything done on the weekends!

(recorded male) Give me a break!

(narrator) They listen to an argument.

(woman) Find the two things in each row that belong, and do them quickly.

(narrator) Then they examine the kids' performance with a timed test, a Rubik's cube, or tracing a star while looking in a mirror. El-Sheikh says the findings are clear. Sleep matters more for kids, and poor kids need it most.

(Describer) Kids play in a schoolyard.

The good news is if poor kids get enough rest, that levels the playing field.

(El-Sheikh) They do not get sick as frequently, and there's less depression and anxiety at home.

(narrator) So even struggling parents can help their kids by sending them to bed early. It's an idea worth sleeping on.

Research tells us that children in general need to get more sleep, but now new findings indicate that kids from lower income families suffer more from sleep deprivation than middle and upper income kids. Auburn University psychologist Mona El-Sheikh wants to know why, so she and her team are studying children’s sleeping patterns and how lack of sleep correlates with the stress factors in their lives and their ability to learn. She suspects that stress is the reason the sleep deprived poorer kids are falling behind.