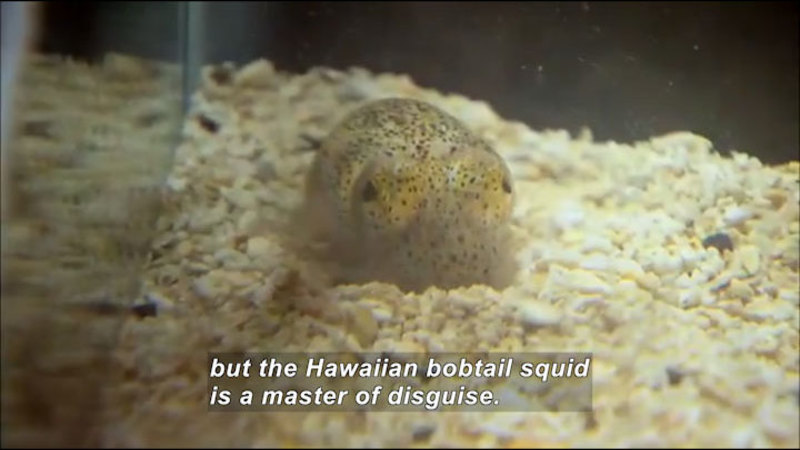 (Describer) A squid speeds through water.

(male narrator) It's hard to hide, but the Hawaiian bobtail squid is a master of disguise.

(woman) During daytime, if disturbed from the sand, they'll sit on the surface with a sand coat,

trying to be invisible. If that doesn't work, they'll eject out ink and leave that blob of ink behind in their shape.

(narrator) Their camouflage strategy at night is even more amazing. Luminous bacteria actually live inside the squid's body and light up its underside, helping it hide from predators.

(McFall-Ngai) They're emitting ventral light. They're camouflaged against the moon or the starlight so they don't cast a shadow. So as not casting a shadow, it's like a Klingon cloaking device.

(narrator) With support from the National Science Foundation, biologist Margaret McFall-Ngai studies the squid's remarkable light organ, the small pouch that's home to the cloaking bacteria, vibrio fischeri. Its structure has a lot of similarities to an eye.

(McFall-Ngai) We look at the entire light organ, so all parts where the bacteria reside in the light organ.

(narrator) To understand how the bacteria take up residence inside the squid, McFall-Ngai's team studies the babies under the microscope. These protrusions right here, which we call appendages, help to filter, basically, bring in bacteria from the seawater.

You have this little cave, this kind of nest, that the squid makes for the bacteria. We bring the eggs into the egg room...

(narrator) Nell Bekiares goes to Hawaii several times annually to collect adult squid off Oahu. In the lab, she oversees the squid condos and the nursery.

(Bekiares) I mate the squid every two weeks. A female will lay eggs about every three to five days. This clutch is a good size, probably 200 eggs.

(narrator) A conversation worth listening in on.

The Hawaiian bobtail squid and its resident bacterium, Vibrio fischeri, have a powerful and still somewhat mysterious symbiotic relationship. The luminescent bacteria populate a small pouch on the squid’s underside called the light organ, and provide a sort of “Klingon cloaking device.” They produce light at night to offset the squid’s shadow and hide it from predators when it approaches the ocean’s surface to feed. At the University of Wisconsin-Madison, microbiologist Margaret McFall-Ngai studies this unusual relationship. An understanding of these creatures’ rhythms could lead to new ways to treat disease. She is also studying how the squid and bacteria communicate, so they don’t harm each other.