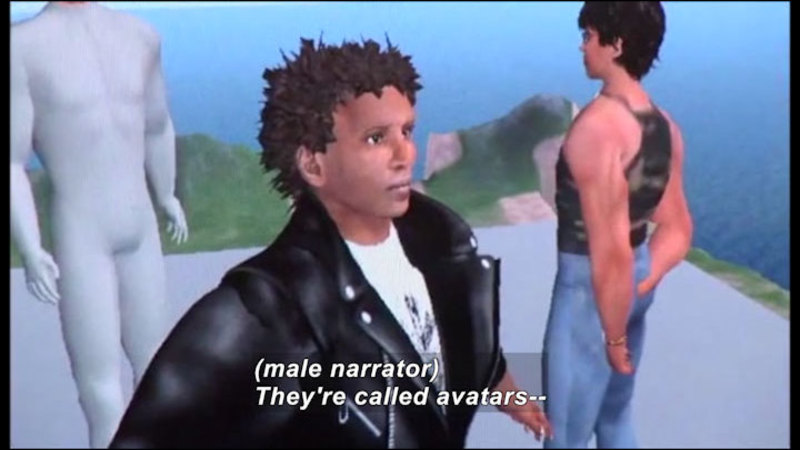 (male narrator) They're called avatars-- electronic personae that we present to the world in cyberspace, a chance for people to reinvent themselves virtually in an instant. I always pick short people. Sometimes I choose to look like a fun and bubbly character. Sometimes I want to look very serious.

(narrator) But could our avatars actually change us? Jeremy Bailenson thinks so. With support from the National Science Foundation, he has created the Virtual Human Interaction Lab at Stanford University to study the power avatars exert on their real-world masters. You can be ten years younger, swap your gender, you can be 30 pounds heavier or lighter. Any behavior or appearance you can imagine, you can transform your avatar to embody.

(narrator) There's evidence that once you see it, you start to become the idealized person you imagine.

(Describer) The model of a man's face is aged.

(Bailenson) For example, I use algorithms to age a 20-year-old undergraduate. Then I give that undergraduate the opportunity to save money or spend it frivolously. The undergraduate will put more money in savings as opposed to spending it partying.

(narrator) It may also affect fitness. In this test, a woman wears a head-mounted display while running in place. Her avatar runs too and visibly loses weight. When she stands still, the avatar stops and gets fatter. As you might suspect, it's important that the avatar resemble its creator.

(Bailenson) Twenty-four hours later, people exercise more after watching the self run than watching someone else run.

(narrator) We tend to prefer others who resemble us. The researchers reached that conclusion in 2004 when they subtly morphed students faces with those of the presidential candidates. Those students favored the hybrid candidate that included their own features.

(Bailenson) It's very powerful stuff. In a world where I can make myself resemble you, how does that affect my ability to influence you?

(narrator) Bailenson believes avatars will play an increasing role in our lives online. How we shape our own avatar and interact with others could have profound influences on our behavior.

As the fascination and passion for avatars increases, researchers are investigating the influence of virtual world characters on “real world” lives. For example, if an avatar starts jogging to get into shape and begins to look thinner, how might that influence an individual’s desire to exercise or lose weight in the real world? With support from the National Science Foundation, Jeremy Bailenson is researching the power of avatars on the bodies and minds through a number of studies at Stanford University's Virtual Human Interaction Lab.