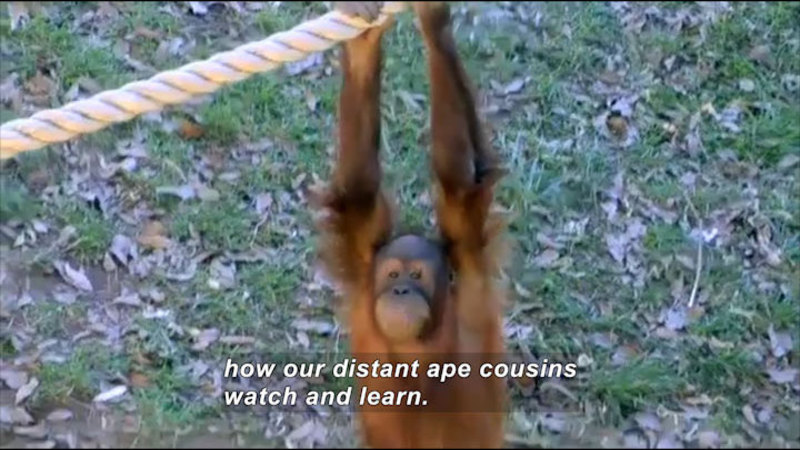 (Describer) Streams of light collide to create a globe filled with water. Title: Science Nation. Two orangutans swing across the bars of an enclosure.

(male narrator) You know the saying, "Monkey see, monkey do," but how about, "Orangutan see, orangutan do?" If that holds true, this guy should learn how to get a tasty treat by watching Mom.

(Describer) ...through a window.

One question is, how they learn from one another, and how does this relate to group behaviors in the wild?

(narrator) With support from the National Science Foundation, primatologist Marietta Dindo is studying these primates at Zoo Atlanta to better understand how our distant ape cousins watch and learn.

(Dindo) What's unique about orangutans compared to humans, or other great apes, is that they're solitary, but social. Which means that individuals, aside from a mother-offspring interaction, will have limited times during the week or months where they spend in affiliation with other orangutans.

(Describer) The window has a small sliding door.

(narrator) Orangutans in the wild are difficult to observe. So Dindo designed an experiment with captive animals. She demonstrates it using this orangutan named Madu, who has figured out she needs to slide, not lift, the door for treats. Little Dumadi is paying close attention, but in this case, big mama, Madu, is so dominant she keeps him at bay. In the actual study, Dindo found equally matched orangutans are superb copycats, but only when it serves their purposes.

(Dindo) It's known from research that apes won't actually imitate unnecessary actions if they know it's unnecessary.

(narrator) Does this orangutan behavior tell us about how much humans have evolved? Dindo says studies show humans aren't as selective, will ape each other just to belong. Humans want to do as others do. This starts around age three, when we start identifying ourselves with others.

(narrator) When it comes to following the crowd, who's more on the ball, humans or apes? Dindo says it depends on your point of view. If it's intelligent to be as others when cultural norms dictate, then, yes, it's very smart. If you don't want to waste resources and want food fast, that's smart. It depends where you're coming from.

(narrator) Here, making the effort to follow the leader finally paid off for Dumadi.

Copying what others do is a familiar human trait. With support from the National Science Foundation, primatologist Marietta Dindo is researching how this copycat trait is shared by our primate cousins, specifically orangutans at Zoo Atlanta. When Dindo offered a novel way to open a box to get a snack, orangutans copied the behavior almost 100% of the time, and then passed it onto the others. This is how traditions are adopted among human populations. Dindo's study provides evidence that this copycat behavior runs deep within the primate family tree.