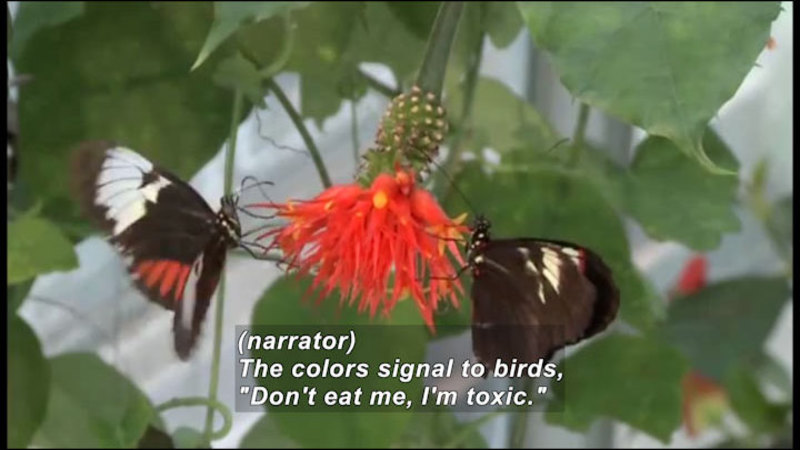 (Describer) Streams of light collide to create a globe filled with water. Title: Science Nation. A man steps through netting to get to a greenhouse.

Everybody likes to be on my hand today. These are pretty cool, aren't they?

(narrator) ...a type of tropical butterfly with a huge variety of color patterns. The hindwing pattern of this is something that characterizes a species called heliconius timareta.

(narrator) The colors signal to birds, "Don't eat me, I'm toxic." He thinks they do more. The color pattern is a complex of two forces-- the anti-predator force, probably the predominant thing, but details may involve the selection of the right mate.

(narrator) With support from the National Science Foundation, Gilbert and colleagues are studying

a population of heliconius they think is in the process of evolving into two distinct species. Scientists seldom get to witness such a split in the family tree up close. It's known as speciation, when one species branches into two that no longer interbreed. The split seems to be tied to color preference. Where Gilbert's team gathered specimens in Ecuador, yellow and white butterflies of same species live and mate with each other. But when studying them in captivity, they observed an interesting twist.

(Gilbert) There is an incipient process going on where yellows are preferring yellows, but whites are not caring which color it is. It's an initial step towards correlating color with mate preference, which, under some circumstances, could lead to speciation.

(narrator) They've been comparing these with their close cousins in Costa Rica. But the two different colored butterflies are actually two different species. You need some step that causes individuals to quit interacting with others in their population.

(narrator) Gilbert is also keeping watch on mating choices at this butterfly greenhouse, part of the 82 acre Brackenridge Field Lab.

(Gilbert) This is serious nature. Everything from fire ant research, frogs, butterflies, snakes, you name it.

(narrator) Next up for Gilbert, identifying the genes responsible for the difference in heliconius color and mate preference. It's all part of watching evolution in action.

Professor Lawrence Gilbert and his team at the University of Texas at Austin have discovered a population of tropical butterflies that exemplify "evolution in action," and a rare research opportunity. Gilbert says they may be witnessing a species of butterfly splitting into two different species. The stars of this research are the Heliconius butterflies, found in Central and South America. Despite the genetic similarities between the two groups of the butterflies, one group is showing a color preference during mating. With support from the National Science Foundation, Gilbert and his team are working to gain insights about genetics, behavior, ecology, and evolution.