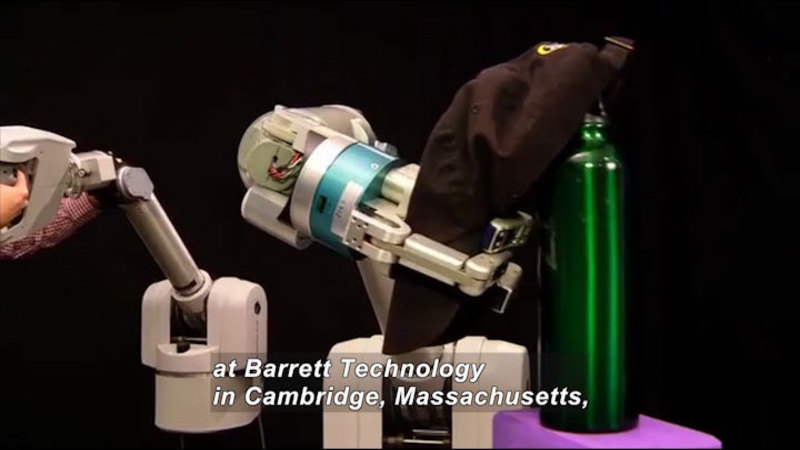 (Describer) Streams of light collide to create a globe filled with water. Title: Science Nation. A man moves a mechanical arm and a robot arm moves the same way.

(male narrator) Brian Zenowich is dancing with some of his favorite stars.

(Zenowich) It's a visceral experience. You are in contact with this machine and working back and forth with the robot. And it's like a dance with the robot.

(Describer) He controls its hand as well.

(narrator) Zenowich is a robotics engineer at Barrett Technology in Cambridge, Massachusetts, where they make robotic arms and hands. You get the skill and intelligence of the person and the robot's precision and speed working together to perform a task.

(Describer) Another man moves an arm.

(narrator) For robot parts to act and react like people, Barrett needed to make them small and portable with maximum agility. With help from the National Science Foundation, they developed a computerized device called a "Puck."

(Zenowich) A Puck is motor controller, which goes into all products, that controls the motors

(Describer) Several go into one arm.

and moves them with as much force, as much torque, as needed. Just as people move, we want our robots to move. So they needed to be small, lightweight, and low-power.

(Describer) One is in the center of a turning disc.

(narrator) The Puck allows the arms and hands to be utilized many ways. The operator can sense virtual objects through the touch of the robot.

(Zenowich) When in contact with our robot, you can feel objects in 3-D space. The robot will create that virtual environment in a physical sense. The Rehabilitation Institute of Chicago is using our robot to perform rehabilitation on stroke patients to make them stronger, to get their brain to understand what were the aftereffects of the stroke.

(narrator) Telerobotics allows for remote operation of the arms and hands, which could benefit the military.

(Zenowich) The robot can go in remotely, under human control, and can disarm the explosive device.

(narrator) Another application is teach and play.

(Zenowich) It's easy to teach our robot to make even complex motions like writing.

(narrator) The robot can be programmed to automatically understand tasks.

If you put a pen in the robot's hand, it would know to write something with that pen.