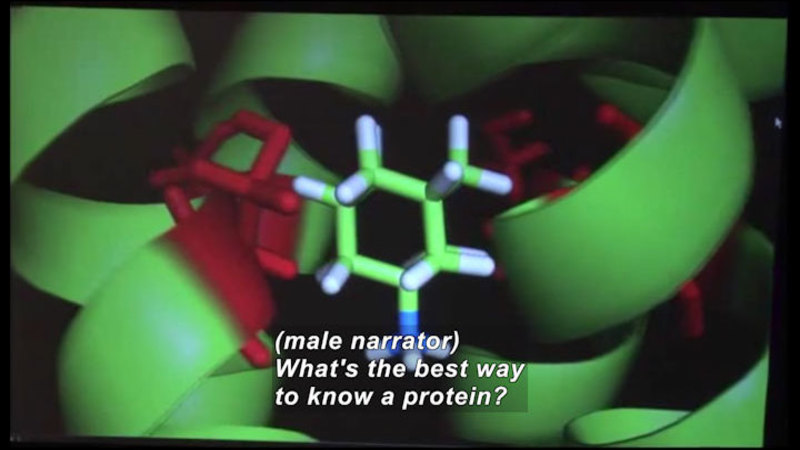 (male narrator) What's the best way to know a protein?

(James Hinton) From a teaching standpoint, it's really important that students be able to touch, feel, see, embrace, if you like, these proteins.

(narrator) Proteins are the workhorses of cells. With support from the National Science Foundation, University of Arkansas biochemist James Hinton researches their structure and function. About five years ago, Hinton focused on creating a dramatically better way of displaying the inner workings of proteins.

(Hinton) Kids are visual people nowadays. So I began to look around for ways of visualizing three-dimensional structures.

(narrator) Hinton worked with the visualization company Virtalis to use virtual reality to show how proteins function, interacting with everything from DNA to a flu virus.

With 3D glasses and a huge screen, students and professors can interact with proteins.

(Hinton) One thing that pharmaceutical companies are vitally interested in these days is how do you take a protein that causes disease, causes a problem, and devise ways of deactivating the protein?

(narrator) Pharmaceutical companies must go beyond creating drugs. They must also be able to update them, as pathogens they're designed to treat mutate and evolve. You trick them a while, then they modify themselves, making the old drug obsolete.

(Hinton) Seeing the binding site before you go into the laboratory and begin making modifications in your drug is a very important thing.

(narrator) The tool is now in wide use internationally. Paul Adams uses it for cancer research. Using immersive technology, and boy, let me tell you, it brings the point home in three dimensions, as opposed to, again, using just a regular computer.

(narrator) Hinton says virtual reality is a great way to entice young scientists. Seeing them have fun is a joy. Maybe one out of these hundred or so kids will say, "Well, biochemistry," or "Hmm, chemistry, maybe I'd like that."

(narrator) Hinton has done his part, helping scientists understand the complicated world of proteins by reaching out to touch one.

Proteins are the workhorses of cells. With support from the National Science Foundation, University of Arkansas biochemist James Hinton has been researching their structure and function for decades. Back in the 1990’s, he had a vision to study these huge protein structures in 3D and now, in cooperation with a company called Virtalis, his vision has become a reality. The new system allows researchers to enlarge the visual of a protein to room-size, so they can examine it from all angles, to better understand its structure and function. The new 3D visuals are also helping Hinton realize his other vision to better engage students in his discoveries and science in general.