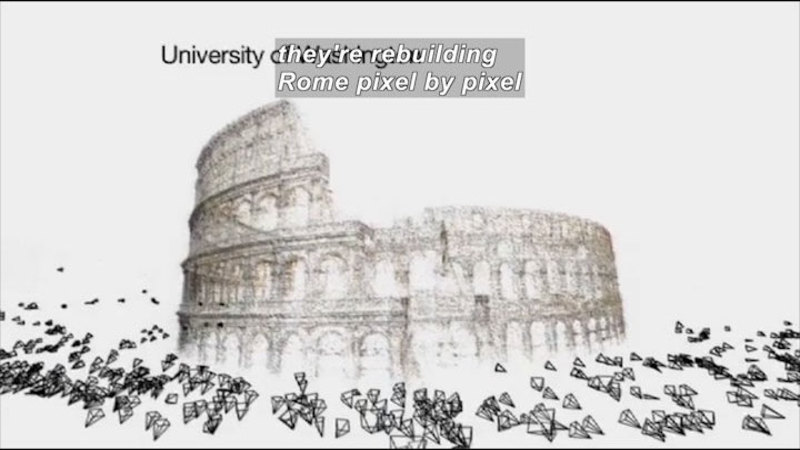 (Describer) Streams of light collide to create a globe filled with water. Title: Science Nation. A view moves up inside a cathedral dome.

(male narrator) Who says Rome wasn't built in a day? With about 500 computers and 150,000 still images, Steve Seitz and his colleagues at the University of Washington, Seattle campus reconstructed many of Rome's famous landmarks in just 21 hours.

how big a city we can build from internet photos.

(narrator) With support from the National Science Foundation, they're rebuilding Rome pixel by pixel instead of brick by brick. Calculations that once took months, now take hours.

(Seitz) This is the largest 3D reconstruction ever attempted. It's completely organic. It works from any image set. People upload the photos, and they appear in our models.

(narrator) It starts with the photo-sharing site Flickr to search for images of the real thing. Once pictures are identified, the computer starts the process of making 3D objects from 2D stills. If I'm a sculpture, there are three photographs of me.

(Describer) A sculpture is shown.

We find the three points in those three photographs which point to my nose.

From that we know that these three points correspond to one point in the 3D world.

(Seitz) For buildings, we can get accuracy to within a few centimeters, if we measure this. For individual objects photographed closer up, we could potentially do much better, like millimeter-level accuracy.

(narrator) Finally, color and texture are added. What you get is a virtual 3D tour, like this fly-through of Dubrovnik, Croatia.

(Seitz) What excites me is the ability to capture the real world,

to be able to reconstruct the experience of being somewhere without actually being there.

(narrator) Look for this next generation technology to appear in online mapping sites, video games and a whole lot more. It's a virtual guarantee.

The ancient city of Rome wasn't built in a day, but now that city, along with all its famous landmarks, can be digitized in just a matter of hours. A new computer program under development at the University of Washington in Seattle combs through hundreds of thousands of tourist photos on Flickr and other photo sharing sites and reconstructs the city – pixel by pixel. Now, viewers can fly around many of Rome's famous landmarks on their computer in far more detail than they'd ever be able to on current virtual map programs such as Google Earth. The new technique may one day create online maps that offer viewers a virtual-reality experience. The software could build cities for video games automatically, instead of doing so by hand.