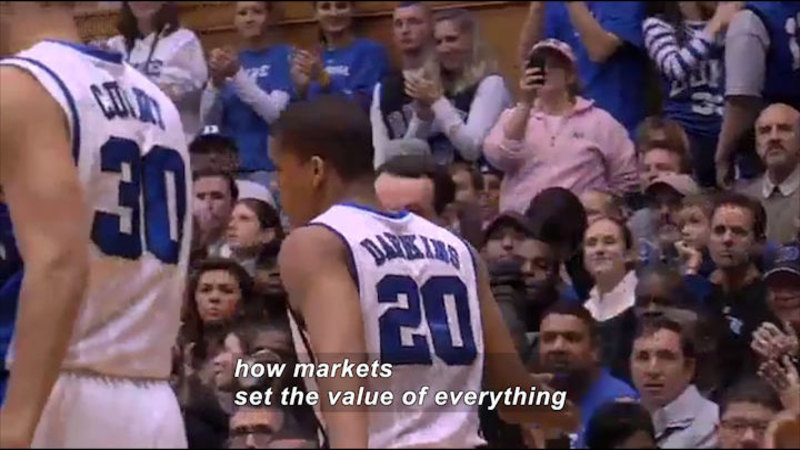 (Describer) Streams of light collide to create a globe filled with water. Title: Science Nation. A college basketball player runs through a defense and dunks as thousands cheer.

(male narrator) Buying tickets to a sold-out game? To get the cheapest, you have a decision: when to buy. I'm here. Whatever it costs.

People without tickets, they'll bring money to make sure they get game tickets.

(narrator) Wrong, says Duke economist Andrew Sweeting. It turns out that basketball ticket will cost you more three months out. With support from the National Science Foundation, he studies the science and complexities of ticket pricing and other goods with expiration dates. To understand how sellers behave and how markets for these goods should be designed.

(Sweeting) Seeing how prices behave, that impacts how consumers would think about timing their decisions in these markets.

(man) In advance, a ticket could go for $250. Out here, you might get a hundred. It's just gonna be paper soon.

(narrator) Sports tickets are very different than airline tickets, where the closer you are to takeoff, the more likely prices are to soar.

(Describer) A jet takes off.

(Sweeting) People who buy last minute are often business people with pretty inelastic demand. They're willing to pay high prices because they need a particular flight.

(narrator) Sweeting says it doesn't pay for airlines to unload unsold tickets by lowering prices last minute. Most people would wait to buy, including those business people.

(Sweeting) Companies have strong incentives like American Airlines to get people to buy early.

(narrator) Airline tickets are an exception. They don't follow typical pricing theories. Sports tickets do. Sweeting hopes his research will help economists better understand the big picture, how markets set the value of everything from tickets to food.

(Sweeting) The motivation is to test many academic theories, which have been entirely theoretical, about how people should price perishable goods.

With help from the National Science Foundation, economist Andrew Sweeting at Duke University is researching markets for perishable goods, which includes tickets because they have to be used by a certain date. Sweeting wants to gain a broader understanding of the general economic forces at play in perishable goods markets. For example, why do sports tickets drop in price closer to a sporting event while airline tickets tend to go up closer to the date of departure? Maybe science can help make sense of it.