Science Nation: Talk to the Animals 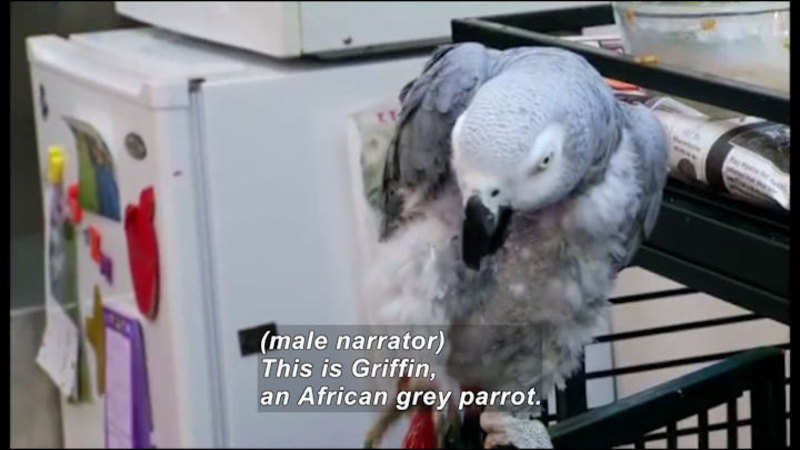 (Describer) Streams of light collide to create a globe filled with water. Title: Science Nation. A grey and white parrot with a black beak perches.

(male narrator) This is Griffin, an African grey parrot.

(Describer) It tastes a green stick.

(narrator) When Griffin talks, does he mimic sounds or consciously make words? What matter is this?

(narrator) Comparative psychologist Irene Pepperberg believes African greys like Griffin know what they're talking about. They understand things like colors, shapes, number concepts, and concepts of bigger, smaller, same, and different. Things we never felt an animal could do, these birds are showing it's possible. What color figure? Good boy.

(narrator) With support from the National Science Foundation, Pepperberg studies the cognitive and communicative abilities in African greys. You like your yellow corn.

(Describer) One takes a spoon out of a bowl.

and the intelligence of a five-year-old.

(narrator) Talking with birds means simplifying language down to motherese. Instead of asking what something's made of, she'll ask... What matter?

(Describer) She holds out a cork.

(narrator) Pepperberg studies Griffin's ability to identify partially obscured shapes. In the wild, we expect birds to have that ability, because seeing part of a predator, you want to respond like it's an entire predator.

(Describer) A circle covers a corner of a square.

(narrator) When testing, she's cautious, making she doesn't send subtle cues to the bird. We have controlled for that so many times. We have different people training versus people testing. What color is smaller? Orange is right. Good boy.

(narrator) Pepperberg says her work talking with birds has benefits for humans.

(Pepperberg) We've used these techniques with autistic children to help learn speech, learn communication skills. And they do learn. What shape?

Most pet owners talk to their animals at one time or another, and some do every day. But, how much do pets actually understand? Is their perception anything like our own? These are the questions that fascinate Irene Pepperberg and she’s looking for answers from the animals themselves, specifically – African Grey Parrots. The Harvard psychology professor is a bit like the character Dr. Doolittle because she’s been talking to parrots for decades. With help from the National Science Foundation, she’s researching how much the birds understand about shapes, numbers, and colors. Her next phase of research involves how the parrots detect optical illusions, and whether they perceive them the way humans do. Her research will also reveal more about how a bird’s vision works.