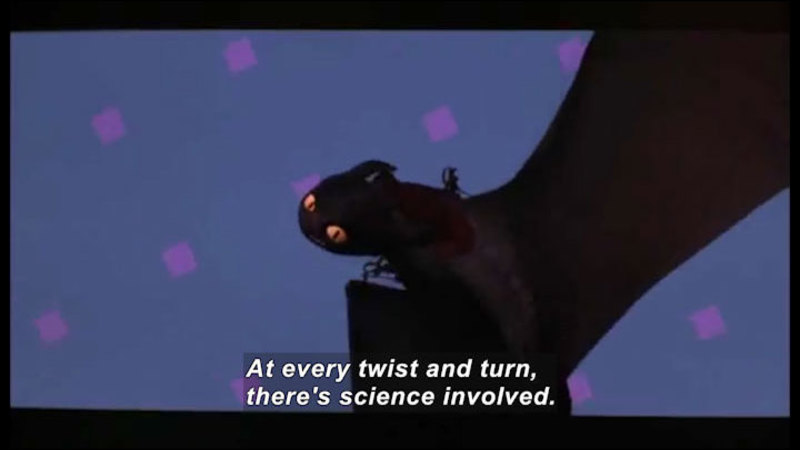 (Describer) A dragon takes off with him caught on the tail.

(male narrator) Did you wonder who designed this flying dragon, making the wings look just right? It takes more than talent to create animation like this. At every twist and turn, there's science involved. I rehearsed this shot by spinning in my chair.

(Describer) He demonstrates, spinning and reaching.

(narrator) Every hop and skip requires an intuitive feel for physics. It's not a natural way for legs to bend.

(Alejandro Garcia) Anatomy is a topic that doctors and artists study. With animation, physics has become another science

which is essential to the craft of these artists.

(Cassidy Curtis) When something doesn't feel physically capable, it pops the audience out of the moment. It reminds the audience that it isn't real. "I'm watching a cartoon." That can really damage the story. This shot wouldn't work out in the real world.

(narrator) Garcia helps create believable, yet wacky worlds of their own.

Each movie and film animation has its own world of physics. The Megamind world wasn't our world.

(Describer) Garcia speaks to a man at a laptop.

If you have the character moving side-to-side, then the foreground stuff is gonna be moving much faster.

(narrator) With support from the National Science Foundation, Garcia has developed a course at San José State University on the physics of animation. He teaches animators in training how to make it all look plausible.

You can stretch the rules, but never break them. The smaller the object, the harder the shadows.

(narrator) Learning these lessons could give these animators an advantage when they start vying for jobs in the movie, TV, and gaming industry.

(Marilyn Friedman) It's a very highly-skilled industry. Not every school is teaching it in the way that will help them succeed at a place like this.

(narrator) Imagine what they'll create with a little physics under their wings. For Science Nation, I'm Miles O'Brien.

In the multi-billion dollar movie and video game industry, making animations come to life is a crucial and revered skill. It takes a solid understanding of physics. For example, animators need to know things like how to cast shadows, how to direct the movement of their characters, and how objects, such as motorcycles, should maneuver. With support from the National Science Foundation, San Jose State University Physicist Alejandro Garcia has developed a course in physics for animators and artists.