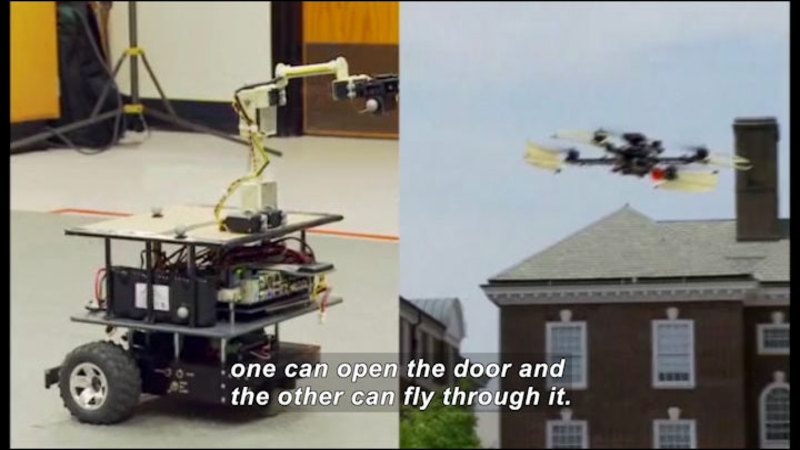 (male narrator) Robots usually get instructions from humans, but what if they could operate autonomously, or even learn by observing other robots? We would like to make the robots adaptive,

learn about the environment, and reconfigure themselves based on this acquired knowledge.

(Describer) At a meeting...

(narrator) The researchers pattern their strategy on the structure of human languages.

One project goal, at the University of Delaware, is to design cooperative robots that can operate autonomously and communicate with each other when deployed at a fire or disaster site.

(Describer) One rolls while another flies.

one can open the door and the other can fly through it. Two robots working together can accomplish more than if they were working independently.

A robot sentence is a sequence of actions it's conducting.

(narrator) He says every language has rules about which sounds go together and which ones don't. Toddlers learn those rules as they learn to talk.

(Heinz) It's amazing, because language is complicated. There's complicated grammatical rules, many different factors that are taking place. It seems to be done very quickly, without much effort.

(narrator) Tanner and Heinz are developing computer programs that equip robots to work together and to learn similarly, to figure out for themselves how to accomplish tasks like moving, grabbing, and releasing objects.

(Tanner) For instance, if the robot has something in its claw, it cannot hold another thing simultaneously. It must drop it before it picks up something else. We're trying to teach the robots these type of constraints. This is where some linguistic techniques come into play.

(narrator) You know, "Two heads are better than one." Well, that may apply to circuit boards as well.

With support from the National Science Foundation, Linguist Jeff Heinz and mechanical engineer Bert Tanner are teaching robots about cooperative behavior, by observing how children learn to communicate and how adults learn new languages. One of the aims of the University of Delaware researchers is to help program robots as first responders in disaster situations. So, for example, a small helicopter robot which is carrying emergency supplies can’t fly through a closed door, but it can communicate with a ground robot capable of opening the door. The need for robots to be responsive to changing situations is critical in disasters. Since kids learn to do many things without overt instruction, the theory is that robots could learn the same way.