Science Nation: Mind Mappers--Mapping the Brain to Understand the Mind 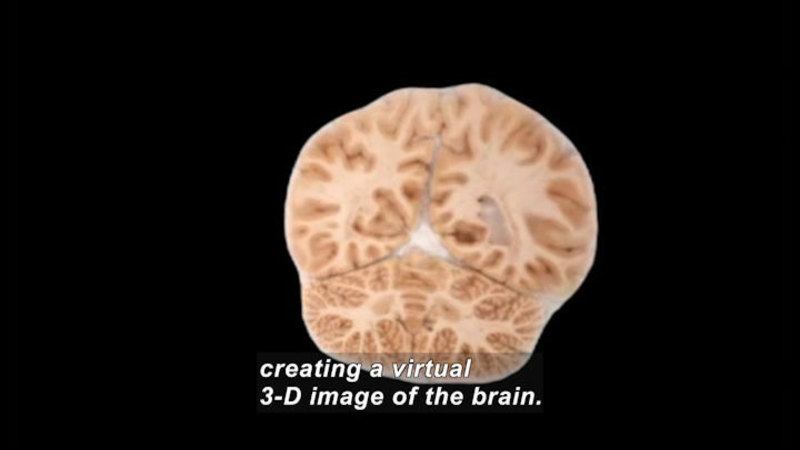 (Describer) Streams of light collide to create a globe filled with water. Title: Science Nation. A man picks at a brain with tweezers and a scalpel.

(male narrator) Picking people's brains is a good way to learn about their minds, so says neuroanatomist Jacopo Annese. We're studying brain structure and trying to understand how the architecture of the brain supports our behavior, our thoughts, our memories, our way of thinking.

(narrator) Annese heads the brain observatory at the University of California, San Diego. He and his team are looking for connections mapping brain structure and connecting it to human behavior. Support from the National Science Foundation helped Annese launch the Digital Brain Library. He acquires donated brains and examines their physical characteristics.

(Annese) The brain is sliced into thin sections, and serially, going from the frontal tip of the brain to the back.

(narrator) A normal-sized brain produces about 3,000 slivers. Each one is placed on glass, stained, and is digitized. Eventually, each slice is digitally reassembled, creating a virtual 3-D image of the brain.

(Annese) If somebody has had a pattern of behavior during their life, is that pattern reflected in the brain structure? Can we see it?

(narrator) Annese finds people the donor knew to find what they were like when alive.

(Annese) It's fascinating to connect their life with the actual brain.

(narrator) But locating those who knew donors can be challenging, so Annese looks for donors to commit to the program while alive. 92-year-old Bette Ferguson signed up, and she does not regret willing her brain to the observatory upon death. I'm not going to need that brain. Once I graduate, goodbye. Point to the number eight.

(Describer) She takes a test.

(Ferguson) If he can learn something from the brain, that's important.

(narrator) In addition to assessing her cognitive abilities, Annese will ask Ferguson about her life experience,

like her role in The Wizard of Oz. I was the flying monkey that came down and picked up Toto and flew off to the witch's castle.

(narrator) Annese thinks understanding the link between brain and behavior will lead to insights to treating brain injuries or diseases. And that's something to think about.

Neuroanatomist Jacopo Annese is looking for 1,000 brains. The Director of the Brain Observatory at the University of California, San Diego is on a quest to collect, dissect, and digitize images of the human brain for the Digital Brain Library, which was launched with support from the National Science Foundation. Annese and his team look for connections, mapping brain structure and connecting it to human behavior. He believes that with a large enough catalog of brains preserved as virtual models, scientists can explore the organ in ways unheard of, revealing new insights into what makes the brain tick.