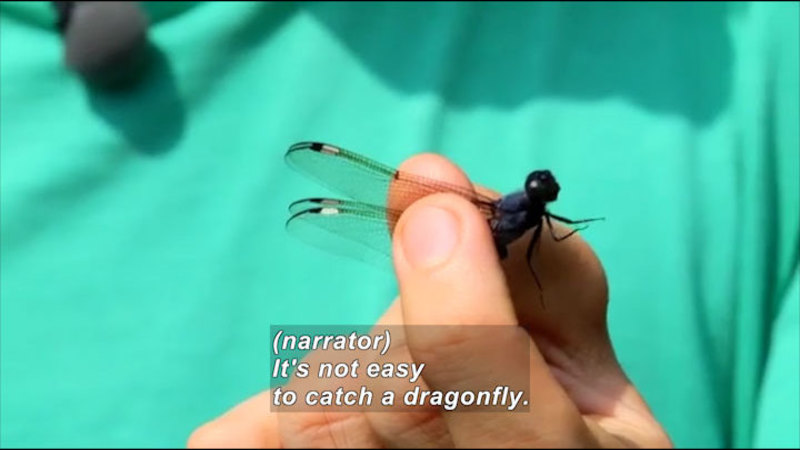 (Describer) Streams of light collide to create a globe filled with water. Title: Science Nation. An insect with a long, thin body and wings stands on a curve.

(male narrator) This dragonfly is grabbing its meal.

(female) The attempt is so fast, unless filmed in high speed,

we can't see whether it caught the prey. If it's chewing, we know it was successful.

(narrator) With support from the National Science Foundation, Harvard University biomechanist Stacey Combes wants to understand how dragonflies pull off these complicated aerial feats-- hunting and even reproducing in midair. Her team set up their lab near a pond outside Boston, right in the heart of dragonfly country. I got one.

(Describer) A man swings a net.

(narrator) It's not easy to catch a dragonfly. I got one.

(narrator) Check out this frog.

(Describer) It lashes out its tongue after a dragonfly has flown.

In this specially built netted enclosure, Combes' team set up eight high-speed cameras. Then they released a dragonfly and some tasty fruit-fly prey to watch what happens next.

(Combes) They'll go in the air, catch the prey with their hands or feet, turn upside down and glide back. The capture will take around a second. This one's missing half of its left front wing

(Describer) She watches a video.

and still does a great job catching this fruit fly.

(male) It only takes about half a second.

(Combes) They caught 90 or 95% of the prey. They're one of the most ancient insects. They've had much time to evolve their predator skills.

(narrator) About 300 million years. These four-winged insects predate dinosaurs. They can fly straight up, straight down, hover like helicopters, and disappear in a blur. And their eyesight?

They can see around their head except right behind them.

(narrator) Dragonflies mate and lay eggs in flight. Do you see her dipping in the water? Yeah.

(Describer) Two fly connected. Combes points something out at the pond.

(narrator) And she says better understanding of dragonflies could lead to better mosquito control strategies.

(Combes) They may consume thirty mosquitoes or hundreds a day.

(narrator) And that's an idea that could really take flight.

Stacey Combes, a biomechanist at Harvard University, and her team are using high speed cameras to help them study how dragonflies pull off complicated aerial feats that include hunting and mating in mid-air. They can fly straight up, straight down, hover like helicopters and disappear in a blur. Combes is also exploring the use of dragonflies for mosquito control.