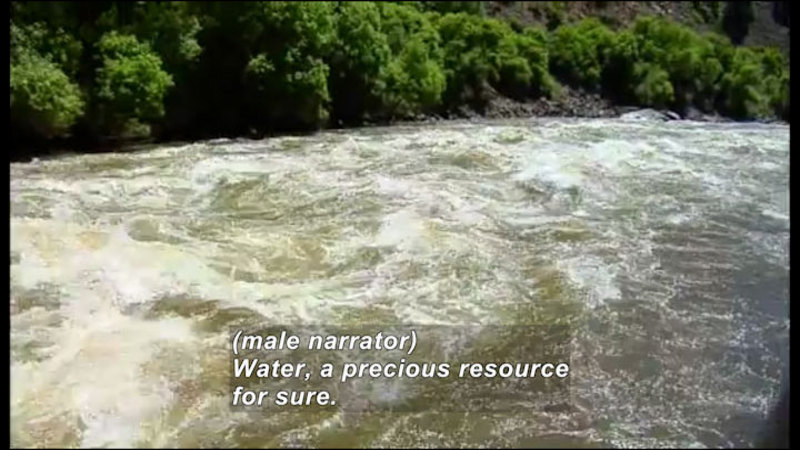 (Describer) Water churns down rapids in a river.

(male narrator) Water, a precious resource for sure. One many take for granted until there's too little or too much.

(Describer) A man steps to a tower.

Scientists and engineers have positioned instruments at the Susquehanna Shale Hills Observatory at Penn State to find out more about the water cycle. It's one of six critical zone observatories.

What we're trying to do is build experimental test beds across the United States. Actually, we're also working with Europeans to understand the cycle of water in all the details.

(narrator) With support from the National Science Foundation, environmental engineer Chris Duffy and his team are focused on learning everything about the Shale Hills Watershed.

(Duffy) We use things like laser precipitation monitors. They're infrared lasers that measure droplets. It tells us the rainfall type, whether it's rain or snow or sleet.

(narrator) Some of it evaporates.

Any water vapor leaving the watershed going into atmosphere is captured by sensors. When you're working with trees,

it's hard to measure

(Describer) He holds up a tarp.

all the water being transpired.

(Describer) Under the tarp...

(narrator) This sap flow sensor measures the rate water moves through trees. It's no surprise that plants are huge water guzzlers.

(narrator) They measure how deep roots of plants and trees go.

(Describer) A woman climbs a tree.

(Gaines) We climb up and get branch samples and put them in vials. We take them to the lab, extract the water, and discover where the water in the tree actually came from.

(narrator) Geology plays a big part. The soil and rock type determines how much water seeps into an underground basin.

(Kamini Singha) While moving, does it clean itself or pick up material?

Understanding water's behavior in the subsurfaces is important to us.

(narrator) A key goal is to help planters better predict the impact of floods and droughts on water supplies. What they're discovering at Shale Hills has really whet their appetite to know more.

Already parts of the world suffer from lack of water, and with increasing demand it's expected to get worse. To better understand and predict drought, thirty universities are collaborating in a multidisciplinary effort called the Shale Hills Project. Among the studies, is field research following the life cycle of water along the Susquehanna River Basin. With support from the National Science Foundation, civil engineer Chris Duffy and his team at Penn State are tracking several aspects of rainfall to better understand the relationship between the flow of water, drought prone areas, and urban populations.