Science Nation: Dams--What Goes Up Must Come Down, and Then What? 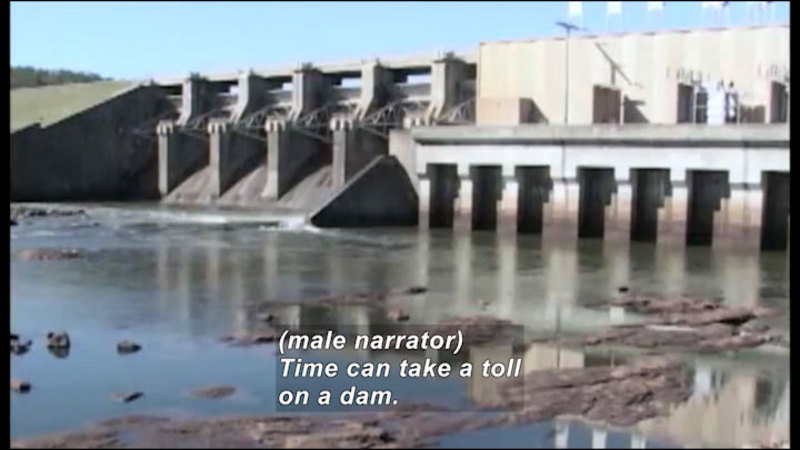 (Describer) A large dam stretches across a waterway.

(male narrator) Time can take a toll on a dam. With age, they're costly to repair, and the risk of a catastrophic dam break increases.

But removing them can mean big changes to the community and environment. A lot of these communities are wrestling

with deciding whether or not to support dam removal, and that uncertainty is hindered by little scientific understanding of what happens when removing a dam.

(Describer) In a canoe:

(narrator) With support from the National Science Foundation, Dartmouth geographer Frank Magilligan studies river systems to learn how dam removal might affect them. His lab has been the small Homestead Dam, built over 200 years ago, along New Hampshire's Ashuelot River. It looked like this a year ago before dam removal.

(Magilligan) Fortunately, we were able to get in

(Describer) Water flows down a ramp.

several months before extraction to get all the necessary pre-removal data.

(narrator) Data like this Ashuelot image, captured using a laser-based ranging tool called lidar, which can peer beneath vegetation, showing the Ashuelot's former riverbed from centuries ago. What they can do is pick up detailed centimeter-scale topographic elevation.

(Describer) A small plane takes off.

(narrator) Magilligan is taking a set of post-dam lidar images to pinpoint where the river is currently flowing.

(Describer) A pole is placed onto rocks on the river bottom.

(Magilligan) From the GPS analysis, we got centimeter-scale topographic information.

(Describer) On the bottom, dirt drifts past a shellfish.

(narrator) Magilligan also studies riverbed sediment to track the river's changing path. He's already detected notable differences since the dam's removal. We've also seen, from our field analysis, a couple of feet of bank erosion in some places. Other places, we see a few feet of bank deposition.

(Describer) Plants stick up through sand.

(narrator) For Magilligan, it's about shoring up our knowledge about how rivers flow in order to make smart choices when it's time for a dam to come down.

There’s been a lot of research on what happens to a river when dams are built, but what happens when a dam is torn down? With support from the National Science Foundation, Dartmouth College geographer Frank Magilligan is researching the impact of dam removal. His lab has been at the relatively small Homestead Dam, built more than 200 years ago along the Ashuelot River in New Hampshire. He and his team have collected data on the ecology and geology of the Ashuelot River both before and after the Dam removal. Now, they’ll be documenting the processes of ecological restoration and how the path of the river is changing.