Science Naiton: New Smart Bandages for Burn Victims and Others 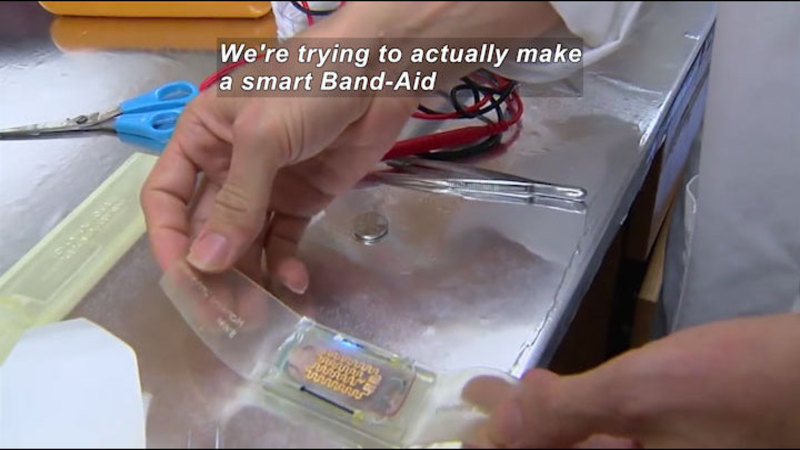 (Describer) A woman sits in a chair.

(Describer) Her waist to the top of her head.

to here. And then from here

(Describer) Her left hip to mid-calf.

(Describer) She walks outside.

(male narrator) Diana Tenney is still recovering four years after 91% of her body was burned in a fire in her backyard. Treating wounds like these can be a huge challenge.

(Ali Khademhosseini) It's getting miniaturized pretty fast. We're trying to actually make a smart Band-Aid that can sense what the state of the wound is.

(narrator) With the National Science Foundation's support, engineer Ali Khademhosseini and a team at Harvard University, are addressing one of medicine's biggest challenges-- treating wounds, especially ones that are hard to heal, like burns, diabetic ulcers, and bed sores.

(Describer) One holds a clear strip with rectangular circuit inside.

(Khademhosseini) So what our devices do, is that they can both sense different things from the wound, like pH, oxygen, temperature, or other things, and be able to respond to it. We're just increasing the oxygen concentration.

(narrator) Wounds need oxygen to heal. Engineer Babak Ziaie is developing a bandage that can detect low oxygen levels and then raise them. Using our systems, you can deliver oxygen to the wound dressing, to areas that don't have oxygen. They're quite elastic. We can make them in different dimensions and thicknesses.

(Describer) A round disk is folded and stretched.

(narrator) Researchers are also testing new flexible materials-- a hydrogel to cover the wound, with just the right amount of stretch to be comfortable, and new methods to deliver medication to the wound. These microscopic particles hold medication like antibiotics, and open up when heated.

(Describer) A part of the strip is pointed out.

This is the heater.

(Sameer Sonkusale) Once sensors and devices are in place,

an important thing to do is to continuously monitor how the wound is healing.

(Tenney) I was bandaged head to toe.

(narrator) Diana welcomes the idea of a smart bandage. When bandaging takes three hours, which is what my bandaging took daily, if you could have a bandage to sense that one particular wound was infected, then you could focus on that infection, I like it.

(Describer) The ends of the strip are stretched.

So how thin can we make this down the road?

(narrator) Khademhosseini sees the day, in five to ten years, when these layers are incorporated into a small, thin flexible bandage, jam-packed with sensors and electronics. Wrap it on and it would be ready-- protecting, monitoring, and treating a wound 24/7.

(Describer) The globe turns by the title.

Some bandages are embedded with medicine to treat wounds, but researchers at Harvard University and Brigham and Women’s Hospital have something much more sophisticated in mind for the future of chronic wound care. With support from the National Science Foundation, engineer Ali Khademhosseini and a multidisciplinary team are bringing together advances in sensors, biomaterials, tissue engineering, microsystems technology, and microelectronics to create “smart bandages” for wounds that require ongoing care. The devices, known collectively as flexible bioelectronics, will do much more than deliver medicine. They will be able to monitor all the vital signs of the healing process and make adjustments when needed, as well as communicate the information to health professionals who are off-site.