Science Nation: Science of Shopping--Cameras and Software That Track Our Shopping Behavior 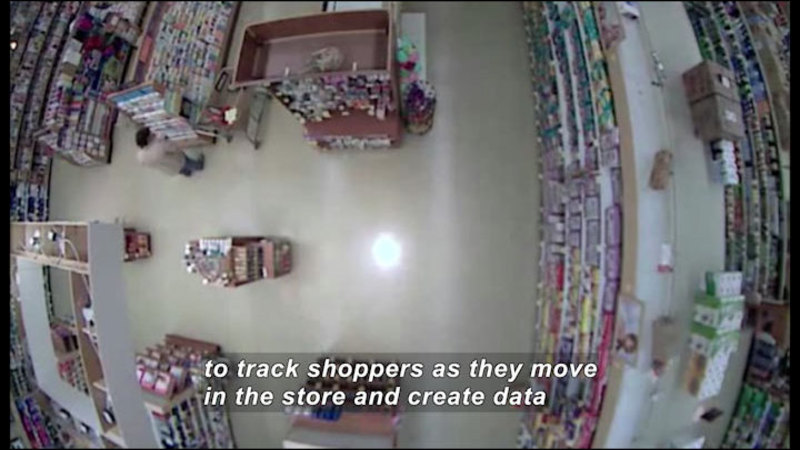 (Describer) Streams of light collide to create a globe filled with water. Title: Science Nation. A camera goes down a supermarket aisle.

(male narrator) With so many products, stores, and Web sites, how do we decide what to buy and where to shop? It's near where I go to class and really convenient.

(narrator) Whether it's the convenience, good service, or finding the best deal, store owners want to know what keeps you coming back to their stores. There's a science to this. Look at all the things which are trying to grab your attention.

(narrator) With support from the National Science Foundation, computer scientist Rajeev Sharma and his colleagues have developed software that breaks down shopping behavior much like Web sites do. His company, VideoMining, uses overhead cameras to put together a top-down view of how people shop and what they buy. What VideoMining does is use software and cameras that are mounted on the ceiling of stores to track shoppers as they move in the store and create data that helps us understand how shoppers are shopping.

(narrator) The software creates maps of a store's traffic patterns by digitally analyzing the video. Cameras like these are positioned directly above, and picture resolution is intentionally set low so that shoppers remain anonymous.

Computers are watching the video and generating numbers that represent the shopper behavior.

(narrator) The idea is to show retailers and manufacturers the best areas in the store to place products and how to create a comfortable place for shopping. Sharma identifies trends. For example, people prefer wider aisles when they shop. Women take a lot longer to shop than men, and brand loyalty is on the wane.

(Sharma) People come in, go between brands, and pick the product based upon price and other attributes. By providing the data to retailers and manufacturers, they can design the stores to match the shopper's interest.

(narrator) The software was initially created to monitor the elderly and disabled in their homes. Now it's monitoring shoppers, giving businesses a leg up in the rat race of figuring out how best to serve customers and keep them coming back.

Go into any grocery store and cameras may be watching you. These cameras are not looking for thieves, they’re looking for shoppers. The cameras are focused on the tops of peoples’ heads (so it’s anonymous), but they don’t have to see faces to track which store aisles get the most traffic and how long consumers spend looking over products. With support from the National Science Foundation, computer scientist and CEO of VideoMining Rajeev Sharma and his team have designed software that automatically generates statistics about in-store shopping behavior. These statistics can provide valuable insights for supporting critical decisions in store layout design, merchandising, marketing, and customer service. Sharma’s team has developed similar technology to help caregivers monitor the elderly.