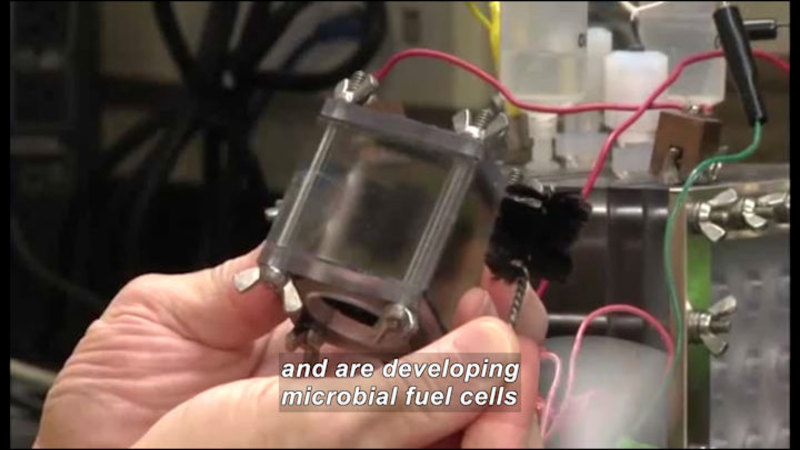 (Describer) Streams of light collide to create a globe filled with water. Title: Science Nation. Water comes from a faucet, a shower and a fountain.

(male narrator) Water, water everywhere. But what pours in, must drain out.

Wastewater treatment plants clean it before it flows back to the environment. The process takes time, money, and a lot of energy. But what if wastewater could itself be turned into energy?

(man) We can take this, pour in wastewater and make electricity.

(narrator) Environmental engineer Bruce Logan is working on ways to make that happen. We're using bacteria to turn organic matter, and some inorganic matter, directly into electricity. The bacteria do it themselves. That's how we're running this fan.

(narrator) Some treatment plants already use bacteria to break down organic waste in the water. With support from the National Science Foundation, Logan and his team at Penn State are going further and are developing microbial fuel cells to channel the bacteria's hard work into energy.

(Logan) We can make different kinds of energy.

(narrator) This cartoon shows how it works. The bacteria eat organic waste, releasing electrons as a by-product. Those collect on carbon bristles in the fuel cell, eventually flowing through a circuit, shown here powering a lightbulb.

(Logan) We're looking at how we link reactors together in order to multiply the power.

(narrator) Wastewater batteries will be useful if they generate enough energy to be cost effective. In the early reactors, we used expensive graphite rods and precious metals, like platinum. We no longer have to use precious metals.

(Describer) Waves roll toward a beach.

And Logan is testing another system that would use saltwater in the fuel cell to generate even more electricity. You're actually creating energy and desalinating the water and treating the wastewater. It's a triple play.

(narrator) Logan expects it will be five years before microbial fuel cells are ready for use in the real world. The goal is that they'd be able to generate enough electricity to power an entire wastewater treatment plant, maybe more. And that's a powerful idea. For Science Nation, I'm Miles O'Brien.

Water is used by everyone, and in the process, a lot of it goes to waste. Whether it goes down drains, sewers, or toilets, much of it ends up at a wastewater treatment plant where it undergoes rigorous cleaning before it flows back to the environment. The process takes time, money and a lot of energy. What if that wastewater could be turned into energy? It almost sounds too good to be true, but environmental engineer Bruce Logan is working on ways to make it happen. With support from the National Science Foundation, Logan and his team at Penn State University are taking the idea a step further. They are developing microbial fuel cells to channel the bacteria's hard work into energy.