Science Nation: Invasion of the Earthworms! 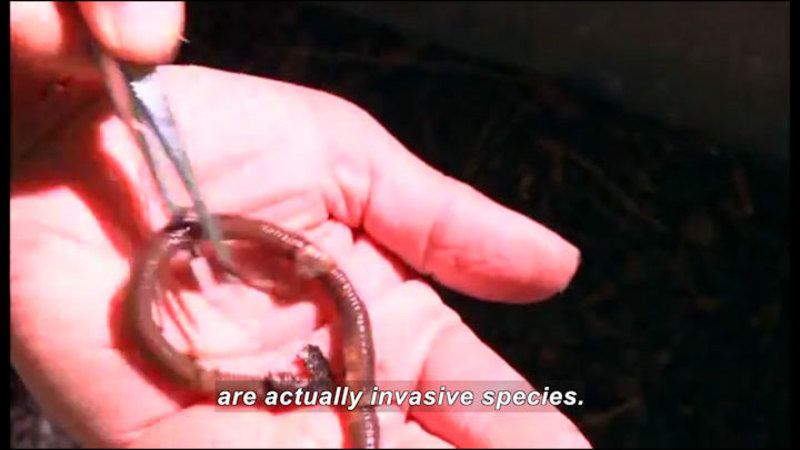 (Describer) Streams of light collide to create a globe filled with water. Title: Science Nation. A woman bends over on a forest trail.

We've got our sample vials, alcohol, and our sampling tray. We're gonna go hunt some earthworms.

(woman) The worms are irritated by this mustard,

and it causes them to come up to avoid it.

(male narrator) Think you know about worms? Great for fishing, for sure. What you may not know is many kinds of worms are actually invasive species. With support from the National Science Foundation, ecologist Cindy Hale is educating people about stopping the spread of nonnative worms. The western Great Lakes region, the area we're focused on, have no native earthworms.

(narrator) Worms do benefit many crops, aerating and enriching the soil with nutrients, but they can also damage forests.

(narrator) Hale showed us a state park mostly untouched by worms. Seedlings, small trees, large trees, and all the age classes of the forest are present.

(narrator) Then a severely invaded area near the University of Minnesota Duluth campus.

In a system that doesn't have earthworms, you get clear boundaries between the soil and the organic matter.

You can see how the earthworm changes the structure, chemistry, nutrient dynamics, and the habitat for all the organisms that live in that soil.

(narrator) Worms eat the rooting zone out from underneath the plants, removing habitat for seeds, young plants, even small animals. Student volunteers, backed up by the Great Lakes Worm Watch Web site, are urging anglers to trash unused bait. Indiscriminate dumping of worms can spread infestation. They were shocked that something that small

that we don't talk about too much could cause potential damage. Resort owners are really great. They really, really want to do their part.

(narrator) Spreading the word and keeping tabs on these invasive species could help stop them from worming their way into more hardwood forests.

Think of earthworms and a few things come to mind: they make great bait for fishing, they aerate the soil, and they’re an excellent addition to a compost pile. But, what a lot of people don’t know is many earthworms are actually invasive species. Earthworms may be small but when they take over a forest, the impact is dramatic. They cause the rapid incorporation of organic material into the soil, changing its structure, chemistry and nutrient dynamics. What's known as the duff layer is suddenly removed, and this duff, or decaying organic material on the forest floor, is habitat for several species of insects, spiders, small vertebrates, bacteria and fungi. It is also the primary rooting zone for most plants.