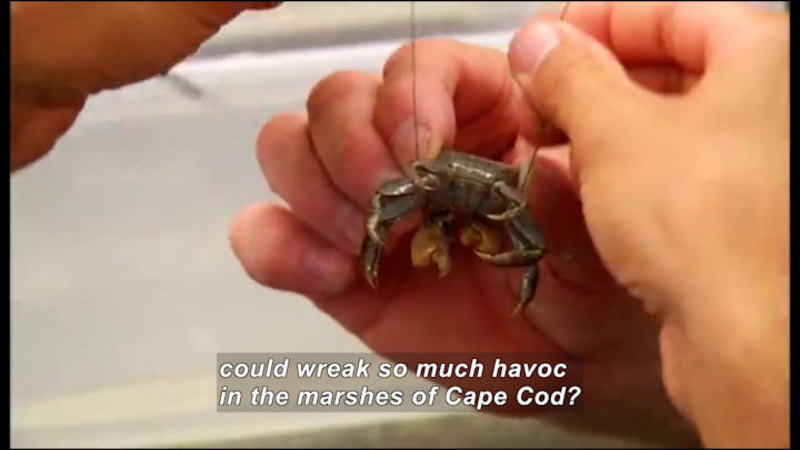 (male narrator) These purple marsh crabs are being tethered to fishing line. Oop. Get back here, bud.

(Describer) A man catches one on a table.

(narrator) Who would think these crustaceans could wreak so much havoc in the marshes of Cape Cod? Blue crabs are their main predator, but they're being over-fished and their numbers are dwindling. The result is an abundance of hungry purple marsh crabs, gorging unchecked on healthy fields of cordgrass, leaving behind lumpy areas of mud.

(man) The cordgrass that's being destroyed here is the foundation species that builds salt marshes.

(narrator) With support from the National Science Foundation,

(Describer) He walks onto a beach.

(Bertness) When I see decimated marshes, I feel sad.

(narrator) Bertness has set up experiment stations all over Cape Cod to monitor the impact of purple marsh crabs on the local habitat. He's ready to go.

(Describer) He drops a cage in the water.

(Describer) He finds an empty line.

(narrator) Here, all the purple crabs get eaten, and the trap is full of predator blues.

(Describer) They're shaken out.

It's no coincidence that this is a healthy-looking marsh, but where the grass is eroded, the tethered crabs remain untouched...

(narrator) and the predator trap is empty. These are waters that have been depleted by recreational fishing from that marina right over there.

(Bertness) People like fishing, and they like salt marshes, and they don't understand there's a tight linkage between the health of both of them. Salt marshes are such an important nursery ground habitat for both recreational and commercial fisheries that it's in their best interest to understand these linkages.

(narrator) Bertness says as long as purple marsh crab populations are high, this ecosystem will remain... Aaah! This one pinched me.

(narrator) in a real pinch.

A quick glance at the marsh next to Saquatucket Harbor in Harwich Port, Massachusetts, reveals right away that some of the grass is missing. The cordgrass there, and all around Cape Cod, has been slowly disappearing for decades. Marine ecologist Mark Bertness of Brown University studies this critical ecosystem, which protects our coastal environment by nurturing a complex web of plants and animals, filtering nutrients, and serving as a critical storm barrier. Bertness says the marshes are being overrun by purple marsh crabs because their main predators, blue crab and finfish, are being overfished. So, the purple marsh crabs are free to gorge on healthy fields of cordgrass and once done feeding, they leave behind nothing but lumpy fields of mud.