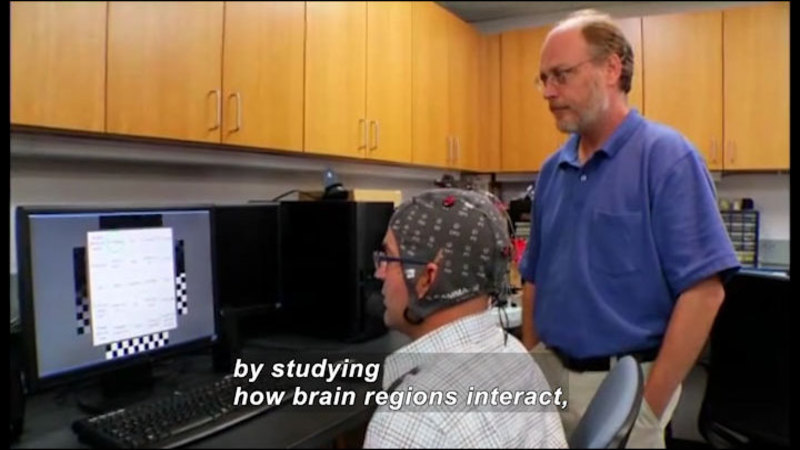 (Describer) A woman pushes a man in a wheelchair.

(male narrator) It's called locked-in syndrome, a condition where people with normal cognitive brain activity suffer severe paralysis, often from injuries or an illness like Lou Gehrig's disease. Locked-in people are unable to move at all, except possibly their eyes. So they're left with no means of communication, but they're fully conscious.

(narrator) With support from the National Science Foundation, neuroscientist Frank Guenther and a team of researchers are working to help locked-in patients by studying how brain regions interact, developing ways to meld mind and machine. These people who have no other means of communication can start to control a computer or the robot and then allow them to interact with the world.

(narrator) This volunteer shows us how she uses a speech synthesizer to make vowel sounds by thinking about moving a hand or a foot.

(Describer) She wears a cap.

We use an EEG cap to read the brain signals

coming from her brain through her scalp.

(narrator) The computer tracks the brain waves. Depending on what body part she imagines moving, the cursor moves in different directions on the screen.

(Describer) A man wears a cap.

(narrator) Grad student Sean Lorenz controls this robot using only brain waves. The checkerboards on the sides of the screen flash at slightly different frequencies. To the naked eye, the differences are subtle, but--

(Guenther) The neurons in his visual cortex fire in synchrony with the checkerboard that he's looking at. We pick up the frequency to determine which choice he was making.

(Guenther) If they're pointing their eyes at a screen, they can focus attention on one frequency, and then they can manipulate a robot or a computer.

(narrator) Pairing biology with technology to find a way out for those who are locked in.

Locked-in syndrome is a condition in which people with normal cognitive brain activity suffer severe paralysis, often from injuries or an illness such as Lou Gehrig’s disease. Boston University neuroscientist Frank Guenther conducts research on how brain regions interact, with the hope of melding mind and machine, and ultimately making life much better for people with locked-in syndrome.