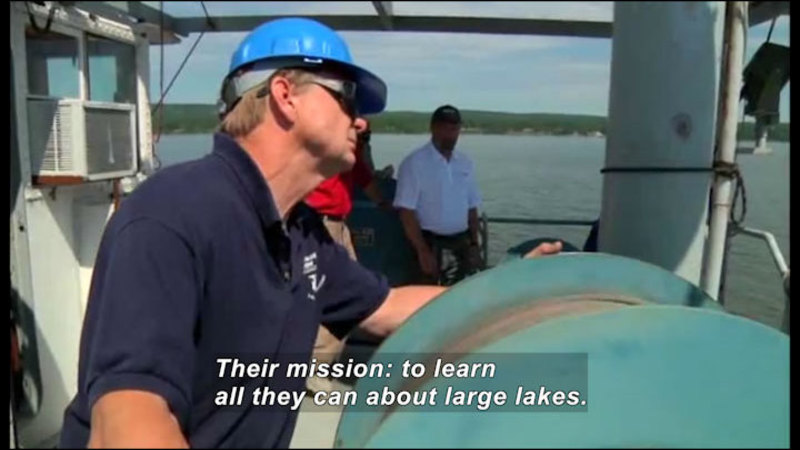 (Describer) A large boat heads out of a harbor.

(male narrator) It's a busy day in the office for scientists aboard the research vessel Blue Heron.

(Describer) It reaches a yellow buoy.

Their mission: to learn all they can about large lakes.

(Describer) They pull the buoy aboard.

On this July day, they're plying the waters of Lake Superior.

(man) There's wide variety of impacts to large lakes. Lake Erie, which is the most impacted.

And then there's Lake Superior, whose waters are mostly in pretty good shape.

(narrator) Geologist Steve Colman is the director of the Large Lakes Observatory, or LLO, at the University of Minnesota Duluth.

(Describer) An inflatable boat is driven away.

With support from the National Science Foundation, scientists here study the biology, chemistry, physics, and geology of lakes around the world, key reservoirs for much of the freshwater on the planet.

As I started doing work in Lake Superior, I realized that very little had been done in the way of scientific study of these lakes, beyond the biology of the fish.

(Johnson) We see, for example, that Lake Superior is warming at a rate that surprises us.

(Describer) They retrieve a torpedo-shaped vessel.

(Austin) I'm interested in determining better links between changes in the regional climate and what happens in the lake itself. We can watch how the physics and the biology of the lake change over time.

(narrator) Research teams also study sediment cores like this one drilled from the bottom of a lake in Mexico.

(Colman) The sediments are like a tape recorder. As they accumulate, they're recording something about climate hydrology,

the energy of the lake.

(narrator) Shortly after we visited, the Blue Heron embarked on an excursion on Lakes Superior, Huron, and Erie, focused on how a buildup of nitrates is impacting their ecology. You might say it's a great laboratory on a Great Lake.

The Large Lakes Observatory (LLO) helps an interdisciplinary group of scientists use oceanographic research approaches to investigate the mysteries of large lakes. With support from the National Science Foundation, LLO scientists work to better understand the biology, chemistry, physics, and geology of these bodies of water. In the summer of 2011, LLO scientists completed a 17- day research cruise on Lakes Superior, Huron, and Erie, focusing on how a buildup of nitrates may impact the ecology of all the Great Lakes. They say a greater understanding of lakes will ultimately improve our management and conservation efforts.