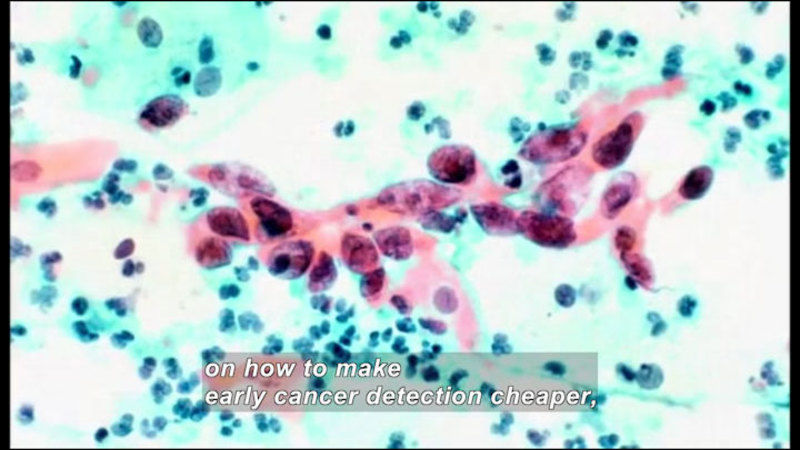 (Describer) Streams of light collide to create a globe filled with water. Title: Science Nation. A woman reports on television in front of a graphic saying “Barnstable This Morning”.

In order to vote in the November 8th election--

(male narrator) For TV correspondent Melissa Chartrand, what started as some abdominal pain led to hysterectomy three years ago. They performed the hysterectomy, but when I woke up, they said, "You have ovarian cancer." I was in total shock.

(narrator) Shock that was followed by grueling chemotherapy. With few early symptoms, ovarian cancer can be hard to detect. Early detection is absolutely not only key but probably the only way to win the war against cancer.

(narrator) They use a new type of microscopy, part of a field called "biophotonics." Backman's team demonstrates the process using cheek cells harvested with a brush.

(Describer) They're wiped onto a slide.

They then shine light on the harvested cells. Photons bounce off structures within them at different angles, depending on whether they are healthy or not. The process is highly sensitive and able to detect very subtle abnormalities, which could indicate problems elsewhere in the body.

(Describer) Colors in the new images show greater differences inside a pre-cancerous cell than do black-and-white conventional images.

(Backman) We see alterations in cells that are indicative of "pre-pre-cancer." If you looked at the cells in the microscope, you would not tell a difference.

(Describer) A probe is placed on the inside of a woman's cheek.

With this probe, we've done probably a couple of hundred patients, and we're about 90% accurate.

(narrator) Backman will soon lead a new clinical trial to screen cervical cells for signs of ovarian cancer, something Melissa Chartrand can appreciate.

(Chartrand) If there had been a pre-screening tool or early detection, I might not have had to go through what I went through.

(narrator) Using light to one day save lives.

There are only a few procedures that can detect very early signs of cancer. Those that do are often invasive, expensive, and uncomfortable. With support from the National Science Foundation, Vadim Backman of Northwestern University is developing technology that makes detecting cancer earlier. He’s doing it by shedding light on cancer cell development at the nanoscale level.