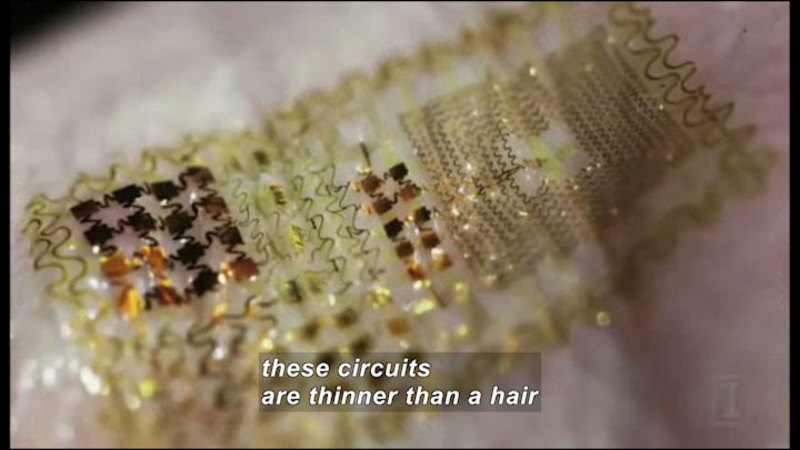 (male narrator) Imagine if there were electronics able to prevent brain seizures before they happened or monitor the surface of a beating heart. Problem is, such devices are a tough fit. Body tissue is soft and pliable, while conventional circuits can be hard and brittle... until now. We're moving from a silicon wafer type of electronics to a biological tissue-like electronics to really blur the distinction between electronics and the body.

(narrator) With support from the National Science Foundation, University of Illinois Materials Science and Engineering professor John Rogers is developing elastic electronics. It's circuitry with a real twist, able to monitor and deliver electrical impulses into living tissue. Made of tiny, wavy silicon patterns, these circuits are thinner than a hair and bend and stretch with the body.

(Describer) A small circuit printed on an arm wrinkles as skin around it is pinched.

(Rogers) As the skin moves and deforms, the circuit can follow those deformations in a noninvasive way.

(narrator) Rogers hopes elastic electronics will open a door to a range of bio-integrated medical devices like this. It's what he calls a "sock," here wrapped around a model of a rabbit heart.

(Rogers) It's designed to accommodate the heart's motion, but keep active electronics into contact with the tissues.

(narrator) Using animal models, Rogers has developed a version that can inject current into the heart tissue to stop arrhythmia. He also envisions an implantable circuit that diagnoses and perhaps treats seizures by injecting current into the brain.

(Describer) A thin sticker is placed on a forehead.

These bio-devices can also be mounted on the skin like temporary tattoos. They detect differences in brain wave activity each time the subject blinks.

(Describer) When he blinks, a wave peaks on a computer.

(Rogers) These are such tiny humans that this epidermal form of electronics could be valuable in monitoring these babies without constraining their motion or disrupting their natural biological processes.

(narrator) Developing technology that's sure to stick around.

Imagine if there were electronics able to prevent epileptic seizures before they happen, or electronics that could be placed on the surface of a beating heart to monitor its functions. The problem is that such devices are a tough fit. Body tissue is soft and pliable while conventional circuits can be hard and brittle--at least until now. Materials scientist John Rogers at the University of Illinois Urbana-Champaign is working to develop elastic electronics.