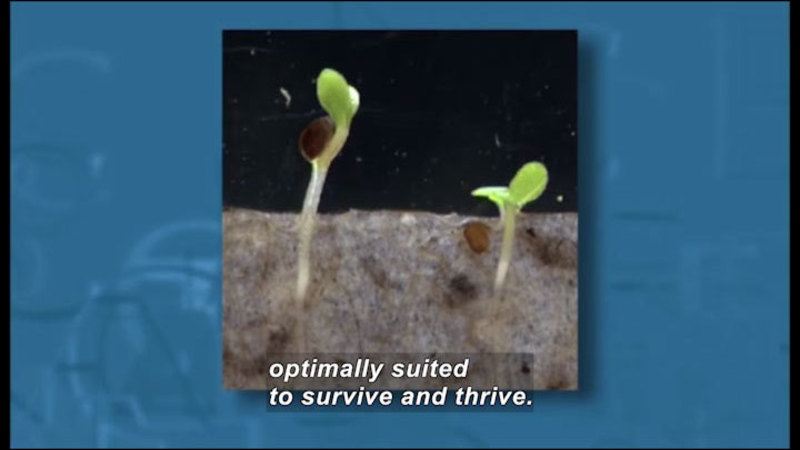 (male narrator) These alien-looking sprouts are actually very down-to-earth. Bathed in red light for optimal growth, they are corn seedlings, one of the plants featured in these time-lapse movies. The goal: figure out how to grow crops optimally suited to survive and thrive. We can't hope to improve a plant unless we understand it well.

(narrator) With support from the National Science Foundation, plant physiologist Edgar Spalding wants to know what makes plants tick. The key is to study the function of each of the genes that make up their DNA.

(Spalding) One way to do that is to collect images of plants that have those genes altered in some way. By measuring how those plants develop differently, we can infer the function of the gene that's been manipulated.

(narrator) Spalding has genetically modified each of these plants so each grows slightly differently. Specially rigged cameras like these snap their pictures once every 30 seconds. These tiny roots are ready for their close-ups. And this robotic camera shoots dozens of roots at once.

(Describer) It moves between roots.

This is the result.

(Describer) They're shown growing in fast-motion.

(Spalding) We have made hundreds of thousands of measurements from thousands of different plants. Let's say we just had a ruler.

(narrator) The time-lapse movies are loaded into a computer. You've isolated regions of interest on the upper and lower sides of the root.

(narrator) An algorithm measures the root's growth rate with pinpoint accuracy, as well as the angle and curvature of its tip.

(Spalding) By using "computer vision" to track their growth and development, we can get at the genes that control root growth, and those, hopefully, will have fundamental importance to crop improvement. It lays the foundation for potential discoveries that will help improve plants for human purposes. A root system that spreads to forage for water better would be an important improvement.

(narrator) Sowing the seeds for better crops of the future. Now that's an idea worth growing.

At first, the back room of plant physiologist Edgar Spalding's lab at the University of Wisconsin-Madison might be mistaken for an alien space ship set straight out of a Hollywood movie. It's a room bathed in low-red light with camera lenses pointing at strange looking entities encased in Petri dishes. A closer inspection reveals the Petri dishes contain nothing alien at all, but rather very down-to-earth corn seedlings. They're grown in red light for optimal growth. They're just one of the plants featured in thousands of time-lapse movies Spalding has created over the past five years. The goal is to figure out how to grow crops optimally.