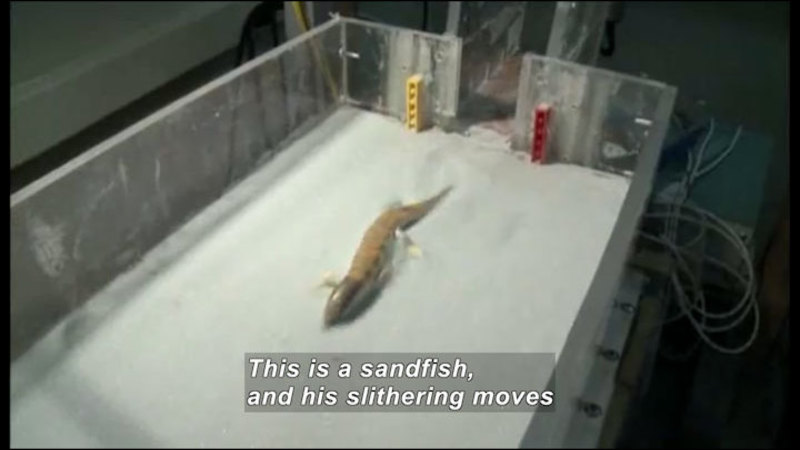 (Describer) A lizard crawls over sand, then dives into it.

(male narrator) Now you see him, now you don't. This is a sandfish, and his slithering moves could one day help search and rescue crews find survivors in piles of rubble left from disasters, like Hurricane Katrina. The sandfish is a lizard that lives in the Sahara Desert

that moves around on the surface of sand using its limbs. When startled, it dives into the sand, using its body to propel itself.

(narrator) With support from the National Science Foundation, Daniel Goldman and his team at Georgia Tech use X-rays to track the lizard's underground movements. They've even developed a robot to mimic its locomotion. They say the sandfish tucks its limbs close to its belly and swims through sand, like an eel wiggles through the water.

(Goldman) The sandfish propagates a wave from its head to its tail, and the wave of the body pushes against the material, and the material pushes the animal forward. This is his body. It's a very square shape.

(narrator) Researchers say this lizard's chiseled body and shovel-shaped head help it slice through sand. It happens so fast that the sand around the lizard takes on the characteristics of a fluid, and the sandfish swims through it.

(Goldman) It's pushing off the fluid that it creates.

(Describer) A search dog barks into a concrete hole.

(Describer) A head pops out of the hole.

It would be nice to have a sandfish robot that could swim in rubble to get into small spaces to look for trapped people or hazardous chemicals. Anything that saves lives is a good idea.

(Atkins) There's very little time to get people out.

(Describer) Another dog barks at a hole.

(narrator) So while he may not look like a hero, this sandfish is teaching us about what it takes to worm through rugged terrain and debris and could one day save lives.

In less than a second a sandfish lizard can dig its way into the sand and disappear. The sandfish's slithering moves are inspiring new robotic moves that could one day help search and rescue crews find survivors in piles of rubble left from disasters. With support from the National Science Foundation, physicist Daniel Goldman and his team at Georgia Tech are studying the lizard’s movements, using x-rays to track it underground. Their findings will contribute to engineering designs for deployable robots that could one day help canine search and rescue teams find survivors more quickly.