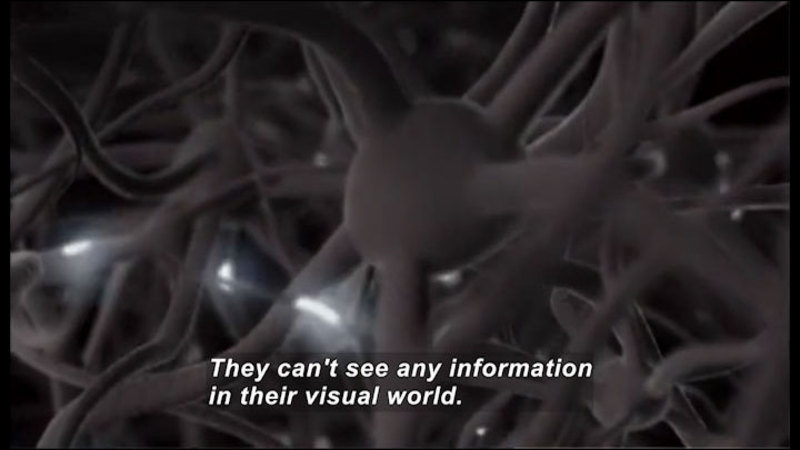 (Describer) Streams of light collide to create a globe filled with water. Title: Science Nation. A man sitting at a computer wears a cap of electrodes on his head.

(male narrator) This brave soul is about to willingly and knowingly go blind. No, he hasn't lost his mind. He's involved in an experiment that recreates blind sight.

Blind sight is a condition that some patients experience after having damage to the primary visual cortex in the back of their brains. These patients go cortically blind. They can't see any information in their visual world.

(narrator) While no one would say blind sight is 20/20, neuroscientist Tony Ro says it holds clues to the architecture of the brain.

(Ro) Other areas of the brain are involved with processing visual information but without any visual awareness. These other parts receive input from the eyes, but they're not allowing us to access it consciously.

(narrator) With support from the National Science Foundation, Ro is learning how other parts of the brain, besides the visual cortex, respond to visual stimuli. If you see a diamond, click on the right.

(Describer) To the test subject:

(narrator) That clicking is a magnetic pulse being shot into this man's visual cortex, disabling it and blinding him for a fraction of a second.

(Describer) A round device is held behind his head.

(Ro) That blindness occurs for 1/20th of a second.

(narrator) Just as he's blinded, a shape flashes onto a computer screen in front of him. Sixty to nearly 100% of the time, test subjects recount the shape correctly. They'll be at significantly above chance levels at discriminating those shapes, even though they're unaware of them. Sometimes they're nearly perfect at it.

(narrator) The blindness wears off almost immediately, no lasting effects. But the findings are telling.

(Ro) Blind sight tells us that there are likely to be many alternative visual pathways that go into the brain from our eyes that process information at unconscious levels.

(narrator) Ro says understanding and mapping those alternative pathways might be key to new rehabilitative therapies.

(Ro) We have many soldiers returning home with damage to visual areas of the brain. We might be able to rehabilitate them.

(narrator) That's something worth looking into.

Tony Ro, a neuroscientist at The City College of New York, is artificially recreating a condition called blindsight in his lab. Blindsight is a condition that some patients experience after having damage to the primary visual cortex in the back of their brains. What happens in these patients is they go cortically blind, yet they can still discriminate visual information. With support from the National Science Foundation, Ro is developing a clearer picture of how other parts of the brain, besides the visual cortex, respond to visual stimuli. He says understanding and mapping those alternative pathways might be the key to new rehabilitative therapies.