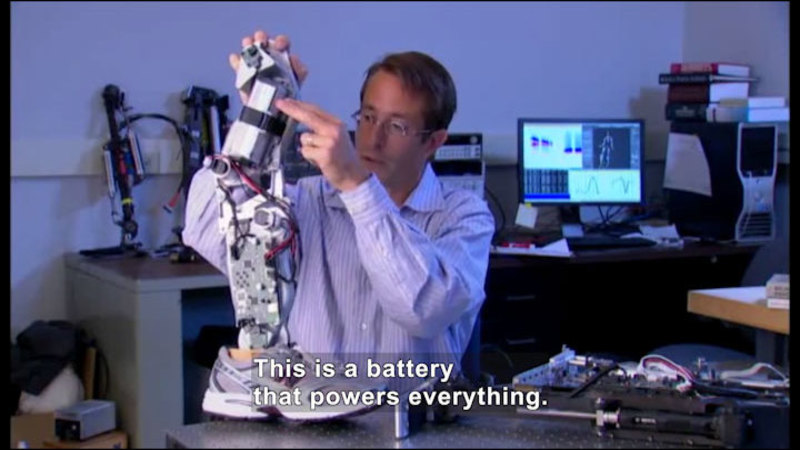 (male narrator) You might say Craig Hutto is part bionic man. In 2005, doctors amputated his leg above the knee after a shark attacked him along the Florida Gulf Coast.

(Hutto) I was 16. When my brother saw something take me under, he saw the back fin of the shark. There was so much tissue damage that it was irreparable.

(narrator) Two years later, and game for a challenge, Hutto became the first test pilot for a unique and powerful new prosthetic leg developed by mechanical engineer Michael Goldfarb and his team at Vanderbilt University. The effort was kick-started by a grant from the National Science Foundation.

We developed an early prototype that demonstrated that you could have a leg that was light enough and could deliver biomechanical levels of torque and power.

(narrator) Version 1.0 evolved into a more streamlined 2.0-- computer-controlled with advanced range of motion in the joints. This is a battery that powers everything.

(Describer) He holds the disconnected leg.

It has the computing capability to work with the user to provide torque at the right time.

(narrator) It responds to cues from the wearer.

Before I go to stair ascent, I kick my thigh back a bit. Just that little movement tells it,

"Hey, you're about to walk up stairs."

(narrator) To reduce the risk of injury, a slight delay has been programmed into the leg's computer.

Hutto confirms it takes less effort to walk compared to the prosthetic he wears every day.

(Hutto) With my leg, it is harder, because it's always a step behind me.

(narrator) Goldfarb says they have sold their technology to a major prosthetic manufacturer.

(Goldfarb) We'll know in the next few years if they'll gain traction in the market.

(narrator) And Hutto, who is studying to be a nurse, is looking forward to walking on a bionic leg that he helped make a reality.

A shark attack survivor now knows what it feels like to be part bionic man. 23-year-old amputee Craig Hutto has volunteered to help test a state-of-the-art prosthetic leg with powered knee and ankle joints. With support from the National Science Foundation and continued support from the National Institutes of Health, Vanderbilt University mechanical engineer Michael Goldfarb has spent several years developing the leg, which operates with special sensors, an electric motor, a battery, and computer technology. Sensors monitor the user's motion and microprocessors figure out what the person is trying to do. Goldfarb says the powered leg reduces the lag time between a real leg and a prosthetic one. Hutto confirms that the powered prosthetic is much better at anticipating his next move.