Science Nation: Threats to Freshwater Mussels and the Consequences for Ecosystems 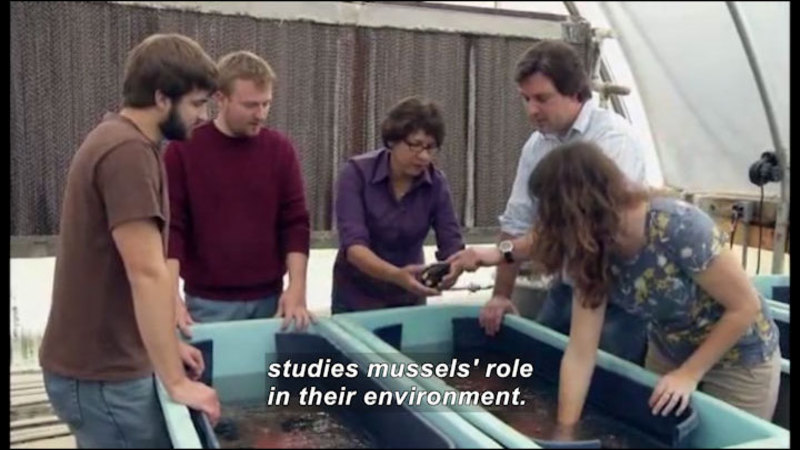 (Describer) Streams of light collide to create a globe filled with water. Title: Science Nation. A woman reaches into a tub.

They have very colorful names. This is called a pistolgrip.

(Describer) She holds a shellfish.

(male narrator) Freshwater mussels with names like fatmuckets, bankclimbers, and heelsplitters, are critical to river ecosystems. But many are in trouble.

(woman) About 70% of the species are threatened in some way.

(narrator) With support from the National Science Foundation, zoologist Caryn Vaughn studies mussels' role in their environment. These invertebrates need plentiful water to thrive and healthy fish to reproduce.

(Vaughn) Freshwater mussels can't move far. They get around by sticking larvae on a fish that takes it to a new habitat. The major problem for freshwater mussels now is habitat fragmentation and channelization by dams.

(narrator) Years ago, mussels were at risk because their shells made beautiful buttons. Now it's about the human need for water. Vaughn does her fieldwork in southeastern Oklahoma, a region hard hit by drought in 2011.

(Vaughn) One river that we've worked in for over 20 years, we've probably lost a third of the mussels there.

(narrator) Mussels live 30 to 50 years, and they're hard workers during that time, cleaning the water.

(Vaughn) They're filtering water and taking impurities out of it. The direction that we're trying to go next is to put monetary values on these services that mussels are providing, and hopefully show that if you leave mussels in the river, it will save you money in water treatment. At the University of Oklahoma's aquatic research facility, she's found that in mussel beds, diversity counts. The more species, the healthier. So we're asking, do bankclimbers and muckets, when they're together, do something different than muckets when they're just by themselves. They're definitely in better condition when they're in more diverse beds.