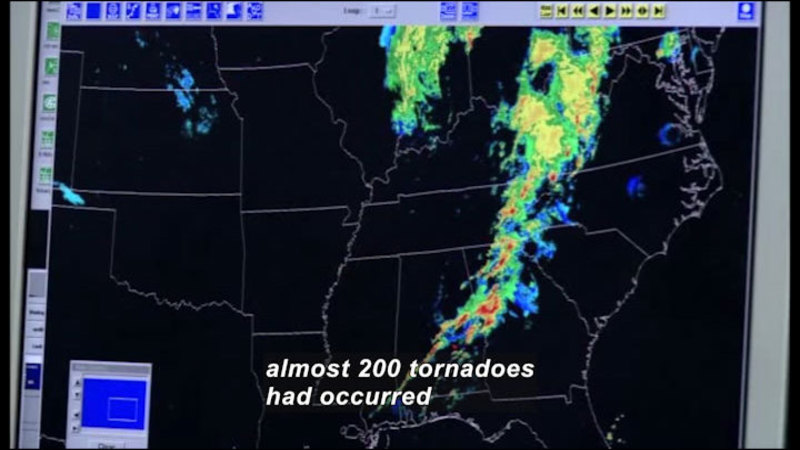 (man on radio) The National Weather Service has issued a tornado--

(male narrator) It was a deadly spring day across the Deep South.

(man) Through the 24-hour loop, almost 200 tornadoes had occurred and, unfortunately, over 315 fatalities. Why? Why so many fatalities?

Why so much destruction?

(narrator) University of Oklahoma scientists, in the middle of Tornado Alley, are looking for better ways to predict them. Why do they form in some storms but not in others?

(woman) You'll see a strong drop in pressure with an increase in vorticity, the area of instantaneous spin. That confirms there was a tornado. With support from the National Science Foundation, Amy McGovern is working with meteorologists to better model tornado formation. They don't just study real storms. They create supercomputer simulations to analyze how constantly changing storm components interact. If you need to understand the atmosphere, there are other variables-- pressure, temperature.

(McGovern) None of the current sensing instruments can get that at the resolution we need to understand tornadoes.

(narrator) McGovern combs through weather data, looking for patterns that might indicate a twister in the making.

(McGovern) Our simulations involve sensing all of these variables every 50 meters.

(narrator) The goal? Instead of tornado warnings based on radar or a visual sighting, someday highly precise alerts could be issued based on a numerical forecast model. It's a complete game changer.

Radar leaves off with detecting something that's already present. A numerical model gives us the opportunity to predict it far in advance. If it works, we may be able to predict a tornado a hour or two in advance.

(narrator) McGovern says the key to the success of any system will be gaining the trust of meteorologists, who communicate warnings to the public. It has to be easy to use and understood deeply. They don't want something that says, "Here the probability."

(narrator) Harnessing supercomputers to better understand tornadoes. The more we know, the better. Lives are on the line.

Tornadoes claim hundreds of lives and cause billions of dollars in damages in the United States. With support from the National Science Foundation, computer scientist Amy McGovern at the University of Oklahoma is working to find answers to key questions about tornado formation. While video from storm chasers and data from Doppler radar can help meteorologists understand some aspects of tornadoes, McGovern uses supercomputers to find patterns in very large datasets. She also works with weather experts to help her sort out the information in the simulations. McGovern’s ultimate goal is to come up with reliable tornado forecasting system.