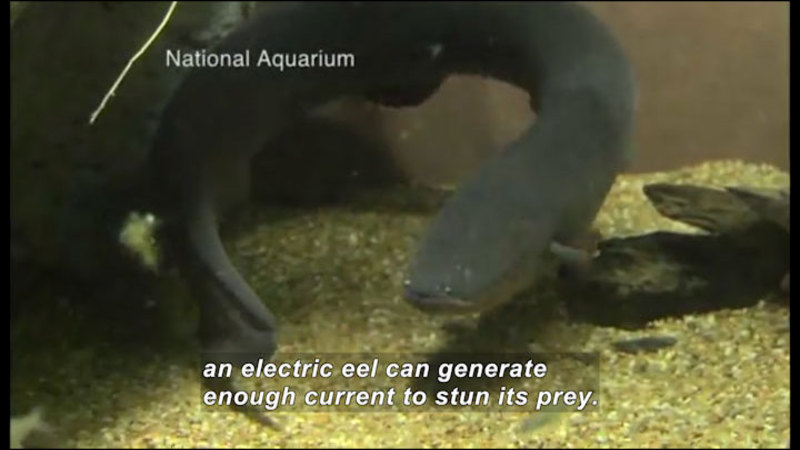 (male narrator) Like a Taser, an electric eel can generate enough current to stun its prey. These so-called "weakly-electric fish" generate electricity too, but not enough to do harm. With the proper equipment, you can even hear an electric hum.

(Describer) Wands are held in aquariums.

in social communication and to detect objects.

(narrator) With support from the National Science Foundation, neuroethologist Eric Fortune traveled to Ecuador to study the weakly-electric knife fish in its native habitat. Back at Johns Hopkins University, his research partner, mechanical engineer Noah Cowan, and others, are studying the knife fish in the lab. He says it uses its electric field as a sixth sense to communicate and to navigate its surroundings and to find its next meal. An organ in the tail generates an electric field which envelops the entire animal.

(narrator) When an object passes through the field, the fish has receptors on its skin to detect it.

(Cowan) There's voltage sensors on the skin. As objects pass, the voltage changes, and it says, "Lunch." or "I'm gonna be lunch," and it flees.

(narrator) Each fish's unique frequency can change when other knife fish are near.

(Cowan) When the two fish come by, their pitches interact much like two singers' pitches would interact. And we've begun to explore how more than two fish interact.

The fish will swim forwards and backwards using his ribbon fin.

(narrator) When the lights go out and it's hard for the fish to see, they use their electro-sense even more to navigate. With the lights on, you move the tube, and they track along.

With the lights off, it's like they're feeling around with their electro-sense.

(narrator) The goal is to understand how the brain of this animal controls its behavior. Engineers at Northwestern University are developing a robot that may one day use a similar sixth sense to monitor the health of coral reefs or navigate the murky waters of an oil spill.

An electric eel can generate enough current to stun its prey. Johns Hopkins University neuroethologist Eric Fortune traveled to Ecuador to study electric knifefish in their native habitat. Back at Johns Hopkins University, research collaborator mechanical engineer Noah Cowan and the rest of the team use Fortune's field data to help with their observations and experiments in the lab. With support from the National Science Foundation, they are studying the knifefish to learn more about how the brains of animals work to control their behavior.