Science Nation: Mapping the Genomes of Crocodiles and Alligators 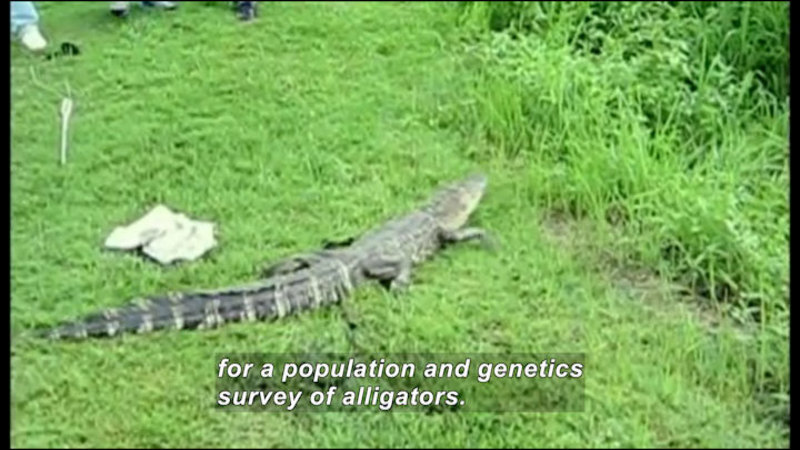 (Describer) Streams of light collide to create a globe filled with water. Title: Science Nation. A man sits on the back of an alligator, holding its mouth shut.

(man) Get ready to go before you release those jaws.

(man narrating) This field trip was to collect samples for a population and genetics survey of alligators.

(male narrator) When David Ray is in the field, it's both science and adventure.

(Ray) It's always important to keep that head under control.

(narrator) With support from the National Science Foundation, Ray and his team at Mississippi State University are mapping crocodile and alligator genomes. These reptiles have changed little over the past 80 million years or so. Ray is itching to see the genetic blueprints, especially since these animals are the closest living ancestors to today's birds.

(Ray) Crocodilians are interesting from an evolutionary standpoint. Their genomes are doing what their bodies are doing. They're evolving very slowly. Birds and crocodilians, though you wouldn't think it from looking at them, are each other's closest existing relative.

(narrator) Genomics could help save endangered species, like the Indian gharial. Scientists could identify the most diverse animals in the gene pool, then breed them.

(Ray) If we understand their genomes, we might keep them from going extinct. We see somebody.

(Describer) He walks through a tunnel with a flashlight.

(Describer) He points the light up into a corner, where a small bat hangs.

This is an eastern pipistrelle.

(narrator) Another aspect of his research takes him to the bat cave. These are the finger bones. Ray's team studies genes called "transposable elements" in bats and other animals. These so-called "jumping genes" can copy themselves and literally jump around in a DNA sequence. Better understanding of them could lead to improved genetic therapies in the future.

(Ray) Transposable elements contributed many regulatory elements that tell a gene when to turn on and off. The fact that they can move from place to place lets us understand better how genes are regulated, how we can change the regulation of genes.

(narrator) Crocs, bats, and other creatures that Ray's team studies may be hard to catch, but understanding their genes is a subject worth wrestling with.

David Ray never turns his back on his research, and with good reason. Ray and his team study alligators, crocodiles, and bats. With support from the National Science Foundation, this multidisciplinary team from several universities is mapping crocodile and alligator genomes. Reptiles resembling these have existed for around 80 million years and they are among the first reptiles to have their DNA sequenced. The research will expand knowledge beyond crocodilians to other reptiles, birds, and even dinosaurs.