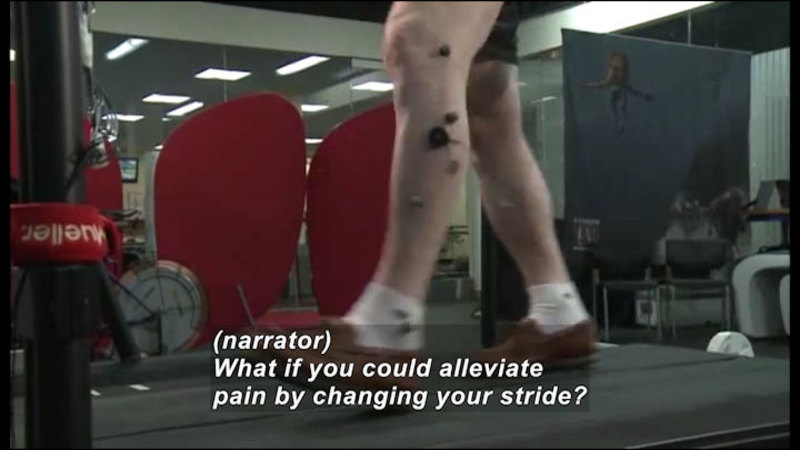 (male narrator) Aches and pains got you down? Suddenly, I developed pain in my knee and it just progressively got worse. I didn't want to walk anymore.

(narrator) The way you walk could be wearing out parts of your body. I've had knee pain off and on for a couple years. Roughly 50% of people, as they age, start to show some evidence of osteoarthritis of the knee.

(narrator) What if you could alleviate pain by changing your stride? With support from the National Science Foundation, mechanical engineer Mark Cutkosky and his team at Stanford University want to help people live healthier lives.

(narrator) They're outfitting test subjects with sensors and then have them hit the treadmill. When Lloyd takes a step, custom software precisely calculates the forces on his joints. And that data helps determine if a gait change might alleviate pain.

(Cutkosky) We use a biomechanics model and say, "Aha! "If you turn your toes, or your knees out, you could reduce adverse loads on the knee joint."

(narrator) One major cause of knee pain is uneven wear and tear on the cartilage, which leads to arthritis. You're comparing this gap to that gap.

(narrator) The idea is to shift weight from the worn-out area to a cushioned area of the knee. Instead of Suzanne walking with one foot pointed out--

(Suzanne) They suggested that I turn it in, which feels strange. Straighten out your right foot and point it straight ahead.

(narrator) They recommend a similar fix for Lloyd.

(narrator) To help test subjects learn their new gaits, the team developed a biofeedback device, and they're working on a portable version to reinforce the modified gait outside the lab. Instead of a lab computer, you use your cell phone.

With support from the National Science Foundation’s Human-Centered Computing Program (HCC), Stanford University mechanical engineer Mark Cutkosky and his team are using volunteer test subjects to find out if the way walk is wearing out their knees. One of the major problems at the root of knee pain is uneven wear and tear on the knee cartilage, which leads to arthritis. Cutkosky’s research, known as Movement Retraining, focuses on alleviating pain by analyzing and possibly changing a person's stride. The goal is to slow the rate at which arthritis progresses and thereby delay or even eliminate the need for surgery. Part of the National Science Foundation Series “Science Nation.”