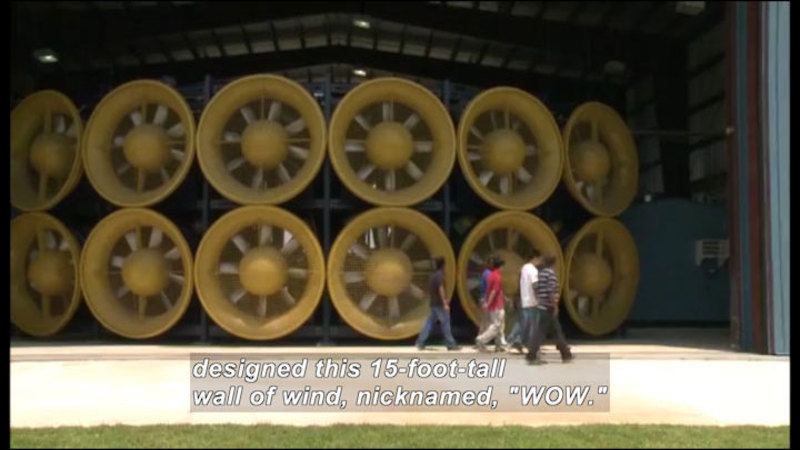 (male narrator) A Category-5 hurricane is a monster of a storm.

(Describer) In photos, areas are covered with debris. Pointing out of an open hangar...

These 12 giant fans can create the intensity of a Cat 5 hurricane, with 157 mile-an-hour winds pummeling roof tiles and solar panels.

(narrator) With support from the National Science Foundation, civil engineer Arindam Chowdhury and his team at Florida International University and the International Hurricane Research Center designed this 15-foot-tall wall of wind, nicknamed, "WOW." Going up to 60 miles an hour.

(narrator) They're seeing if low-rise structures and building materials can withstand the wind forces of a full-blown hurricane. We did testing on rooftop equipment, and based on the results, we sent recommendations to the Florida building code that are now in the Florida Building Code.

(narrator) Manufacturers work with Chowdhury to test the durability of new products. For example, will this solar panel stand up to hurricane force winds? Sensors measure the pressure on the panel as the wind starts to blow.

(man) We want to make sure

that the unit stays on the racking. What wind speed? It's about 120.

(Describer) The panels are in a frame bolted to the top of a wooden shack.

(man) Can we flip it around?

(narrator) A rotating turntable exposes all sides to headwinds. We can get the data for all the directions of the wind. I don't think we'll see damage from what I saw.

(Describer) Kornahrens watches on a monitor.

It's great. You couldn't get this in any other type of test.

(narrator) Next, some roof tiles and adhesive foam. It's solid, the way it's installed.

(Describer) A man pushes on the roof and foam on the shack.

That foam works with this good tile.

(narrator) The tiles and foam pass with flying colors. The building itself, not so much.

(Describer) It's blown through the open hangar doorway and topples over.

Chowdhury says such foundation failures are rare. But lessons learned here could save lives, helping us better prepare for that next big storm. Now that's a WOW. For Science Nation, I'm Miles O'Brien.

A Category 5 hurricane is a monster of a storm that most people would want to avoid. But, Civil Engineer Arindam Chowdhury actually recreates those monster hurricane force winds in hopes of helping people better prepare for the real thing. With support from the National Science Foundation, Chowdhury and his team at Florida International University and the International Hurricane Research Center designed a 15 foot tall Wall of Wind (WOW). The goal is to see if low rise structures and building materials can withstand the same wind forces they would face in a full-blown hurricane. Part of the National Science Foundation Series “Science Nation.”