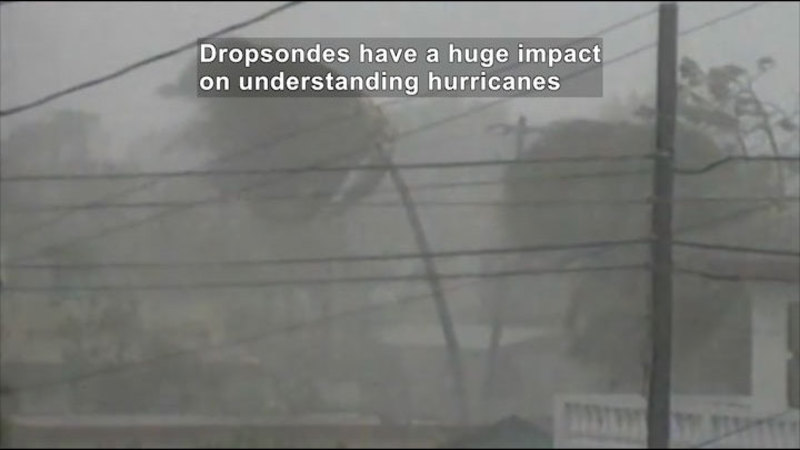 (Describer) Streams of light collide to create a globe filled with water. Title: Science Nation. On a small plane...

(male narrator) This cylinder is called a dropsonde, or "sonde" for short. It launches from an aircraft and falls through the air gathering data about the atmosphere as it descends. It's a workhorse of hurricane forecasting, dropping out of hurricane hunter airplanes right into a raging storm. Dropsondes have a huge impact on understanding hurricanes and predicting hurricanes.

(narrator) With support from the National Science Foundation, electrical engineer Terry Hock and colleagues at NCAR, the National Center for Atmospheric Research, have been designing, building, and improving dropsonde technology for over 30 years for a wide range of applications.

(man) This is the dropsonde that NSF aircraft use for our scientific research purposes.

It's also extensively used by the hurricane research people.

(Hock) We have temperature and humidity sensors down at the bottom.

We also have a parachute at the top.

(narrator) As it falls, the dropsonde checks its surroundings two times a second, including pressure, temperature, humidity, wind speed, and wind direction. We're taking vertical slices of the atmosphere constantly as the sonde falls.

(Describer) Readings form a pattern on a monitor.

(narrator) Hock and his team custom-fit aircraft with sonde launchers, including this one for helium-filled balloons.

(Describer) One goes up.

In 2010, American and French researchers deployed balloons over Antarctica that dropped 600 sondes to study atmospheric conditions and the shifting ozone layer over a four-month period.

(Martin) That has mapped the Antarctic atmosphere like it's never been done before.

Every little measurement shows up immediately on the computer screen.

(narrator) Such information is helping scientists learn more about the atmospheric conditions that spawn hurricanes. Hock expects this will help forecasters make earlier and more precise predictions, giving people in the path of a killer storm more time to evacuate out of harm's way. For Science Nation, I'm Miles O'Brien.

Inside a cylinder that is about the size of a roll of paper towels lives a circuit board filled with sensors. It's called a dropsonde, or “sonde” for short. As the sonde falls through the air after being dropped for an airplane, its sensors gather data about the atmosphere. Dropsondes have a huge impact on understanding hurricanes and the ability to predict hurricanes. Part of the National Science Foundation Series “Science Nation.”