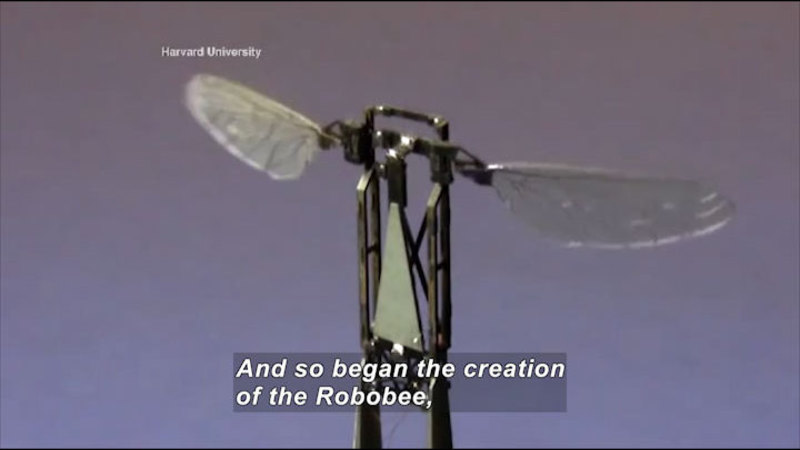 (male narrator) It all started with a TV show, Silence of the Bees, about honey bee populations in steep decline. Electrical engineers, Gu-Yeon Wei and Rob Wood at Harvard University saw a challenge. And so began the creation of the Robobee, a miniature flying robot.

(Wood) We have to develop all of the physical components from scratch,

like how they talk to each other, coordinate algorithms for having a colony of them work together.

(Wood) This is where we do play tests.

(narrator) With support from the National Science Foundation and its program called Expeditions in Computing, Wood assembled a diverse team of collaborators to get the Robobee project off the ground.

(Describer) The tiny machine with flapping wings is shown in slow-motion.

(Wood) Expeditions in Computing is looking for new ways of thinking about different, important problems in computer science.

(narrator) One challenge, to design the tiny folding exoskeleton that houses the bee's wings, motors, and electronics. Inspired, in many ways, by children's pop-up books, we take a variety of different materials and layer them and laminate them together.

(narrator) And if the fuel source is too heavy, the bee can't fly. A collaborator is making micro-fuel cells that should be better than the batteries we're producing.

(Wei) There's so much that goes into just achieving what bees in nature seem to do without any effort.

(narrator) They're hoping to build a colony of interacting Robobees. There will be no queen bee, but they'll design a hive that will work as a refueling station. One day, a swarm of these micro-robots could be deployed to search for victims after a disaster. While that would be years away, Wood says the advancements they've made so far are already creating quite a buzz.

Harvard University, electrical engineers Rob Wood and Gu-Yeon Wei, and computer scientist Radhika Nagpal created the “RoboBee,” a miniature flying robot, inspired by the biology of a bee and the insect’s hive behavior. With support from the National Science Foundation and a program called Expeditions in Computing, Wood put together a diverse team of collaborators to get the RoboBee project off the ground. Ultimately, the researchers hope to build a colony in which the RoboBees interact, using their hive as a refueling station. They say RoboBees have the potential to be useful in a number of ways, including search and rescue missions, traffic monitoring, and weather mapping. Part of the National Science Foundation Series "Science Nation."