Science Nation: ALMA-Seeing the Universe in a Whole New Light 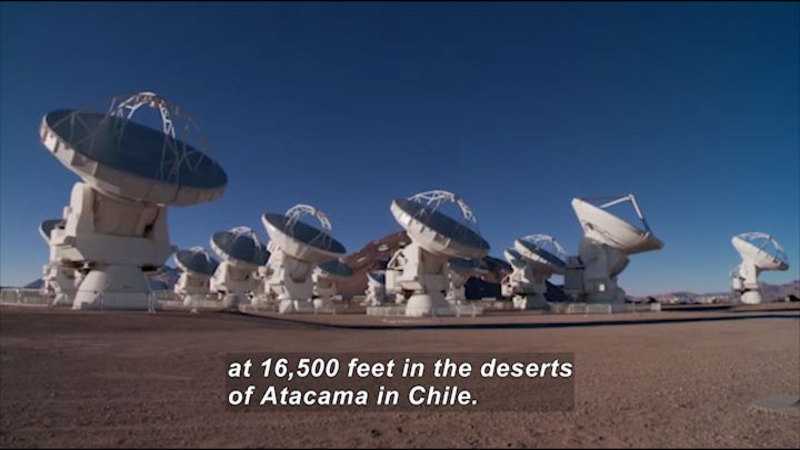 And with support from the National Science Foundation, it's allowing them to see the universe like never before.

and it will be a telescope made up of 66 antennas at 16,500 feet in the deserts of Atacama in Chile.

(narrator) Kartik Sheth is with the National Radio Astronomy Observatory in Charlottesville, Virginia. He's part of a team of astronomers putting this new array to work.

(Sheth) Together, these telescopes, as a single telescope, can be as large as ten miles in diameter and ten to a hundred times more powerful than any existing telescope.

(narrator) In the high desert, ALMA sits above 4% of the Earth's atmosphere and virtually all the world's water vapor.

(Sheth) It gives us a window that is transparent to outer space.

(narrator) ALMA will peer into a slice of the electromagnetic spectrum at millimeter wavelengths, light that is closer to a radio wave than to optical light our eyes can see. ALMA has the ability to map the gas and dust in galaxies with the same power, the same sensitivity and resolution, from today to the edge of the universe.

(narrator) That's critical for Sheth, who also studies the evolution of galaxies. ALMA can look where optical telescopes can't. Many stars are forming around the black hole at the center of this galaxy. We'll zoom in to this central ring, and ALMA can see where the dust is located, and we're able to understand how much fuel there is for the black hole.

(narrator) ALMA can detect hidden gases inside galaxies that can hold the key to star and planetary formation. It might even detect the building blocks of life.

(Sheth) What excites me about my work is the possibility of discovering new star systems, new galaxies.

(narrator) Unlocking the secrets of the universe by seeing it in a different light.

At first glance, the bone-dry landscape of the Atacama Desert in Chile might seem inhospitable. But, it’s prime real estate for astronomers. This desert is now home to the largest ground-based radio telescope in the world called the Atacama Large Millimeter/submillimeter Array or “ALMA for short. And, it’s allowing astronomers to see the universe like never before. Part of the National Science Foundation Series "Science Nation."