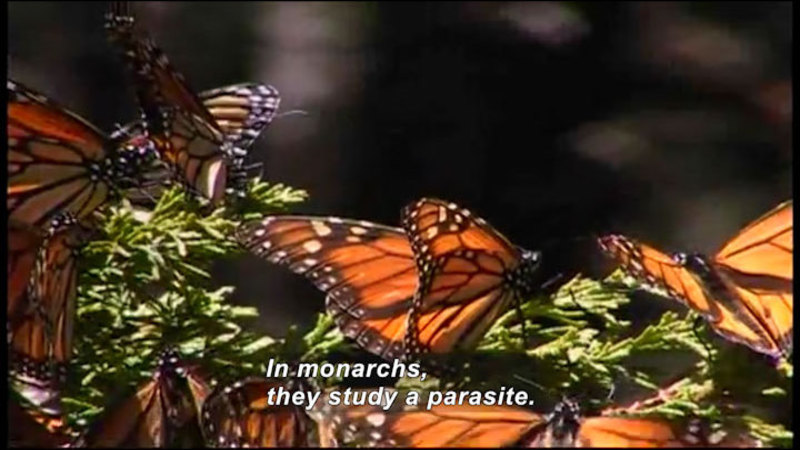 (woman) It's amazing that insects weighing half a gram can live so long and travel so far.

(Describer) She takes one from a net and measures it.

(narrator) With support from the National Science Foundation, Altizer and her team study how long-distance migration in flying animals affects the spread and evolution of infectious disease. In monarchs, they study a parasite. Adult butterflies that are heavily infected look like this one.

(Altizer) This is a protozoan parasite called ophryocystis elektroscirrha-- OE for short.

(Describer) A butterfly pulls a thin arm in a circle.

in her University of Georgia lab tracks speed and stamina.

(narrator) Human diseases can spread quickly. It only takes one infected person hopping on an airplane. But for insects and birds, long-distance travel often means lower infection rates. Perhaps only the strong survive?

(Altizer) We would struggle if we ran a marathon with the flu. Heavily infected animals drop out of this migration en route to their wintering sites. They can't make a long-distance journey.

(narrator) Human activities, like habitat destruction and herbicide use, are disrupting long-standing migration patterns. If we take the migration away and we're left with remnant populations that don't migrate, infections could build up in those populations, and that could increase the risk of pathogens jumping over into people and their domesticated animals.

(narrator) In Peru, Altizer's team studies vampire bats. Their populations have exploded as ranchers have introduced livestock into the Andes and the Amazon. And more bloodthirsty bats might mean more rabies. One goal we have is to understand what determines the frequency and intensity of rabies outbreaks and what to do about it.

(narrator) Altizer also analyzes data and parasite samples sent from citizen scientists around the world. Her aim is to piece together the big picture of how pathogens spread when their hosts take wing.

There's a most unusual gym in ecologist Sonia Altizer’s lab at the University of Georgia. The athletes are monarch butterflies, and their workouts are carefully monitored to determine how parasites impact their flight performance. With support from the National Science Foundation, Altizer and her team study how animal behavior, including long distance migration, affects the spread and evolution of infectious disease. Part of the National Science Foundation Series “Science Nation.”