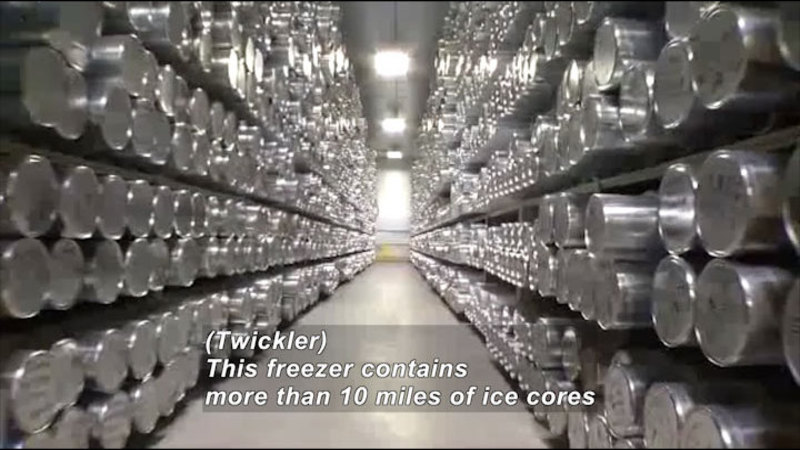 (Describer) Streams of light collide to create a globe filled with water. Title: Science Nation. A card is slipped into a cylinder of ice, and another is cut lengthwise.

(male narrator) It's a busy, freezing cold day inside the National Ice Core Lab in Denver, Colorado. We're cutting gas samples out of this core.

(narrator) Scientists from Maine to California cut pieces of precious Antarctic glacier ice to take back to their labs for study.

(narrator) With support from the National Science Foundation for the West Antarctic Ice Sheet, or WAIS Divide, lab manager Mark Twickler and scientists, engineers, and support personnel traveled to the bottom of the world to drill out and bring back ice cores. The project's goal? To collect and study perfectly preserved records of the past. With polar glaciers, each year that it snows there, the snow never melts. One year of snow on another year of snow compresses. So everything that fell from the atmosphere--dust, ocean salt, volcanic ash-- is preserved in that ice core.

(narrator) This ice sheet is over 70,000 years old. The team drilled more than two miles into it to retrieve cores which were flown to the U.S. and stored in a giant freezer at the Ice Core Lab.

(Twickler) This freezer contains more than 10 miles of ice cores collected from around the world.

(narrator) The ice core's layers are like tree rings, each layer representing a year of weather and snow.

(Twickler) We can determine past temperatures and how rough the oceans were around Antarctica and how dusty Australia was.

(Describer) Ice is dropped in water.

(narrator) Scientists study bubbles trapped in the cores, each a pocket of air frozen in time.

(Twickler) We measure gases that were in the atmosphere when the bubbles were formed.

(narrator) Other scientists study how ice sheets melt over time.

(woman) We don't know how the ice sheet, as a whole, will respond in a case of changing climate.

(narrator) This icy blast from the past is helping researchers better understand climate change. That will help them make better predictions as to what a changing climate may mean for our future. For Science Nation, I'm Miles O'Brien.

It’s a freezing cold day inside the National Ice Core Laboratory (NICL) in Denver, Colorado. That’s because the NICL is a facility for storing and studying ice cores recovered from the polar regions of the world. And, saws are buzzing, as scientists from all over the U.S. are measuring and cutting pieces of precious Antarctic glacier ice to take back to their labs for research. Part of the National Science Foundation Series “Science Nation.”