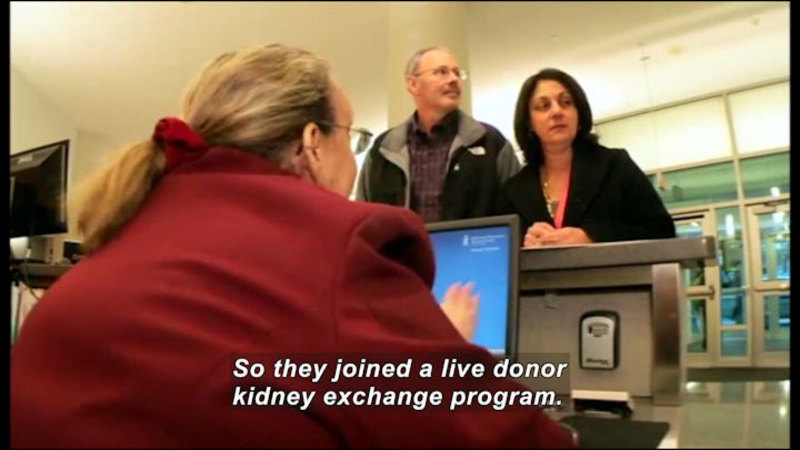 (Describer) Streams of light collide to create a globe filled with water. Title: Science Nation. A man walks into a meeting room where another man and a woman sit.

(male narrator) You're watching a special reunion. I didn't know whether I'd ever meet my recipient. I was thrilled that we could get together.

(narrator) Doug came into the Burns's life in 2010, when Jack, who has diabetes and high blood pressure, needed a kidney. Adele wanted to give him one of her own. I wanted to have my husband around. We had few options. I was grateful...

(Describer) He lifts his head and shakes it.

to have someone that loves you that much.

(narrator) But Adele was not a good medical match. So they joined a live donor kidney exchange program. She donated a kidney to a suitable recipient, and Jack got a kidney from Doug. It's different from getting a deceased donor's organ. If somebody brings a living donor with them,

they have a great chance of getting transplanted sooner.

(narrator) With support from the National Science Foundation, Harvard University economist Al Roth helped develop a suite of computer programs that match living kidney donors with recipients. You look for ways to arrange those exchanges to get as many of them as possible.

(narrator) So what's an economist doing organizing kidney transplants? Turns out an understanding of game theory and market dynamics is key to optimizing the pairings.

(Roth) To organize exchange, you need a marketplace and a clearinghouse. That's what we tried to help put together.

(narrator) The software is comprehensive, matching participants with compatible blood types and antibodies. Think of it as a medical version of Match.com, linking donors and recipients, making chains of transplants possible across the country. Game theory is a giant thing for thinking about big systems in which there are lots of different incentives. And the care of patients with kidney disease is, perhaps, a hundred-billion- dollar-a-year industry.

(narrator) It's all about streamlining complicated matches using the science of the marketplace. For Science Nation, I'm Miles O'Brien.

Harvard economist Alvin Roth is a matchmaker but he’s not finding love – he’s finding kidneys. With support from the National Science Foundation, he and his team have developed a suite of computer programs that match living kidney donors with recipients. Why is an economist organizing kidney transplants? It turns out that an understanding of game theory and market dynamics is key to optimizing pairings. It's all about streamlining complicated matches using the science of the marketplace. Their matching software is the engine that has helped transplant centers in 30 states so far. Part of the National Science Foundation Series “Science Nation.”