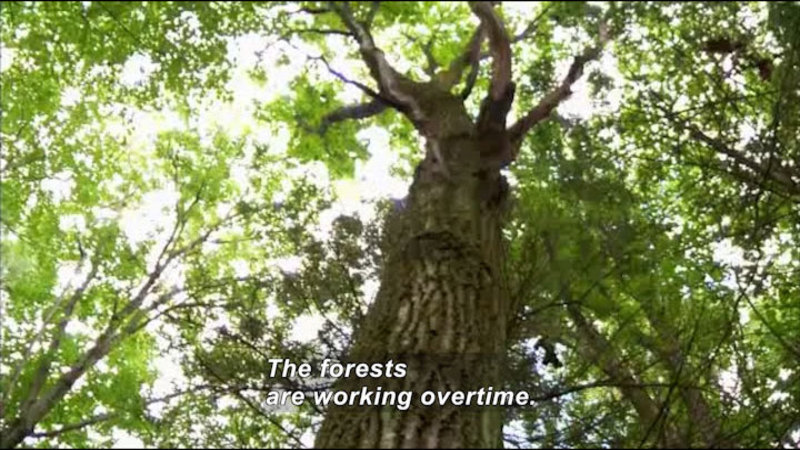 (male narrator) You might never know it, but this seemingly tranquil New England forest is hard at work doing serious global housekeeping.

(man) There's this enormous sucking sound, metaphorically, that is happening

across the New England landscape and the eastern U.S. of carbon being brought down out of the atmosphere into our forest and reducing the amount that is up in the atmosphere.

(Foster) We're trying to understand what shaped the land, where this landscape is going, and what's to be the fate of the eastern United States.

(Describer) He takes a tree sample.

(narrator) That includes determining how the forest responds to carbon dioxide in the atmosphere. Atmospheric scientist Bill Munger is climbing one of two hundred-foot towers used to collect air samples.

(Munger) If you're afraid of heights and don't trust your equipment, you can be afraid.

(narrator) He's changing filters on the sensors atop the towers that measure CO2 concentration four times a second. We add that up over a half an hour and get how much CO2 went into or came out of the forest.

(narrator) Tree trunk width and leaf litter are recorded. After analyzing decades of data, Munger says the Harvard Forest is drawing more carbon from the atmosphere every year.

(Munger) Every year, the forest takes up two to up to four metric ton of carbon per hectare of forest.

(narrator) The problem is serious. Globally, we emit more than 30 billion metric tons of carbon dioxide annually, and the number continues to rise. The forests are working overtime.

(Foster) They're storing more carbon in the form of wood and material that gets stored and built into the soils around this landscape.

(narrator) Even so, Foster says while forests can't solve the climate problem-- globally, we pump more carbon dioxide into the atmosphere than forests take out-- they are more critical than ever to managing CO2 levels.

One might never know it, but the seemingly quiet Harvard Forest in Massachusetts is actually hard at work. Like other forests, it’s busy doing some serious global housekeeping, which is being monitored by scientists at Harvard University. With support from the National Science Foundation, researchers are studying forest ecology. That research includes determining how the forest responds to carbon dioxide in the atmosphere. Part of the National Science Foundation Series “Science Nation.”