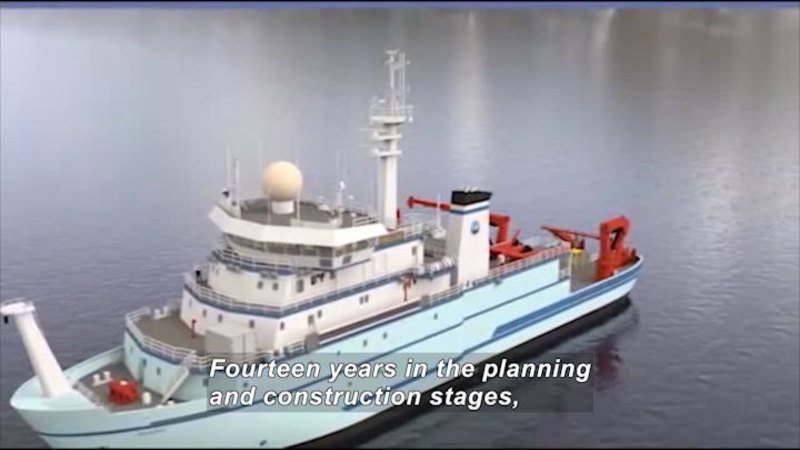 (male narrator) With a slide and splash, the research vessel Sikuliaq took to the water on a wet, windy day. But for scientists itching to explore Arctic seas off Alaska's coast, it was all sunny smiles. Amazing day. It's been so long in the making. To see it go in the water was phenomenal.

(narrator) Working with the National Science Foundation, Dean Michael Castellini and other scientists from the University of Alaska Fairbanks are overseeing the Sikuliaq's construction at the Marinette Marine Shipyard in Wisconsin. The 261-foot-long ship is designed to move through ice and will be outfitted with the latest navigation and mapping technology, laboratories, sensor systems, and over-the-side-handling cranes. Fourteen years in the planning and construction stages, it is the brainchild of oceanographer Terry Whitledge. The mission of this vessel is basically to support state-of-the-art science in polar regions, especially ice-covered seas.

(narrator) The nearly $200 million ship is funded largely by the American Recovery and Reinvestment Act.

(Whitledge) It was the first project for stimulus funds. Since the package was ready and there was a single contract for the construction, it was perfect for stimulus-type funding.

(narrator) Marinette Marine's Chuck Goddard says the project is employing welders, pipe fitters, electricians, and others in the shipbuilding trade.

(Goddard) It will take about two and a half years to deliver the ship. In that time frame, there'd be between 100 and 200 people on board. We employ 1,400 people at the shipyard. It's a sizable part of our workforce.

(Describer) Again the ship is shown being launched.

(narrator) Now that the ship is in the water, the build-out continues. The science can't start soon enough for Whitledge.

(Whitledge) We're trying to still understand the basic makeup of the Alaskan ecosystem. There's also an element of concern about the number of fisheries resources that we have and our harvest, global climate change and what it's doing to the biological resources, such as fisheries.

(narrator) A voyage of discovery to do science on ice. An idea worth building on.

The National Science Foundation in cooperation with the Marinette Marine Corporation (MMC) and the University of Alaska, Fairbanks has successfully launched the R/V Sikuliaq, a next-generation global class research vessel. MMC is the Wisconsin shipyard that built the ship, with funding provided by NSF through the American Recovery and Reinvestment Act of 2009. UAF's School of Fisheries and Ocean Sciences will operate the ship as part of the U.S. academic research fleet. The new vessel's name, Sikuliaq, pronounced “see-KOO-lee-ack,” is an Inupiat word meaning young sea ice. Part of the National Science Foundation Series “Science Nation.”