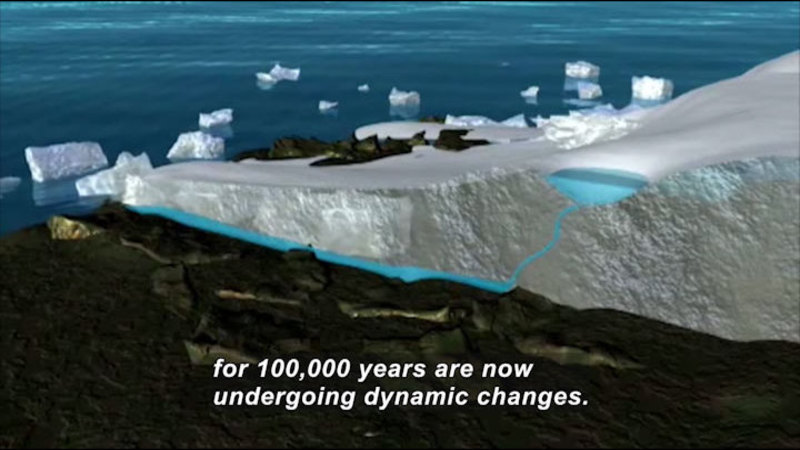 (man) We did extensive measurements on outlet glaciers that have changed rapidly over the last few years.

(male narrator) From the ground, the air, and space, scientists are studying disappearing ice cover in Greenland and Antarctica. Understanding polar ice in our warming climate could help communities prepare for sea level rise likely to impact millions of people worldwide in the 21st century.

(man) They're predicting anywhere between 50 centimeters to two meters.

If you think about even a one-meter sea level rise, it's going to be a significant issue for populations in low-lying areas.

(Gogineni) Most areas that are undergoing changes are around the margins of the ice sheets. These areas are extremely rough, so surface-based operations are dangerous and extremely difficult.

(Describer) A 3D computer model has different layers of colors.

(man) What you're seeing is the actual topography of the bedrock: mountains, the valleys, the hills--

everything that's below the ice. Scientists can get an idea of what's going on and create better models to predict the future.

(Gogineni) It can fly almost 2,000 kilometers

and takes 1/20th of the fuel of the Twin Otter.

(Describer) Young men in white protective suits work together while another man watches.

(narrator) Aerospace engineer Richard Hale and his students build and test UAVs. You're taking what predominantly has been military technology and you're applying it to a science problem of global significance. The potential for science contributions of unmanned aircraft is large.

(narrator) The CReSIS team says glaciers that have been much the same for 100,000 years are now undergoing dynamic changes. They hope to unlock their secrets so communities around the world can be ready for rising seas.

The Center for Remote Sensing of Ice Sheets (CReSIS) is a Science and Technology Center established by the National Science Foundation (NSF) with the mission of developing new technologies and computer models to measure and predict the response of sea level change. CReSIS provides students and faculty with opportunities to pursue exciting research in a variety of disciplines; to collaborate with world-class scientists and engineers in the US and abroad; and to make meaningful contributions to the ongoing, urgent work of addressing the impact of climate change. Part of the National Science Foundation Series “Science Nation.”