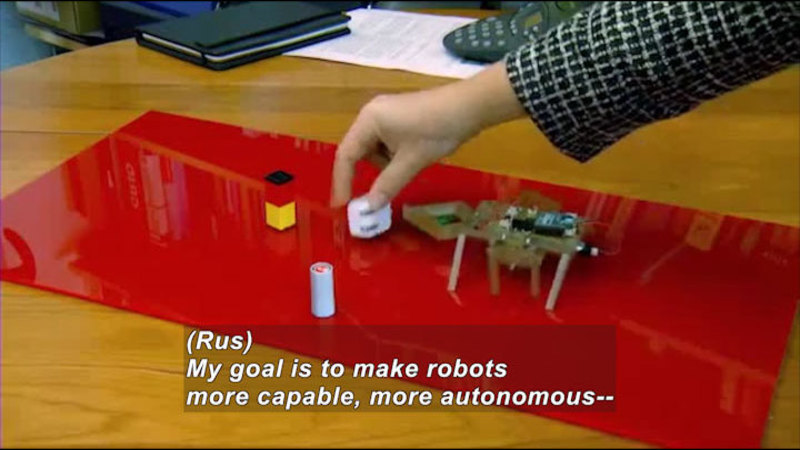 (male narrator) The tasks may seem easy, but the engineering is hard. These robots can help in the kitchen, plant vegetables, or even assemble furniture. They're some of the helpful bots Daniela Rus is developing at MIT. Now she's rolling out a new line of robots, hot off the press of an ink-jet printer.

(Rus) My goal is to make robots more capable, more autonomous-- to bring machines into everyday life in a way that our lives will be improved and enhanced by these machines.

(narrator) With support from the National Science Foundation and its Expeditions in Computing program, roboticist Rus and her team are developing printable bots designed to be inexpensive as well as useful. This one grabs objects and might one day help someone in a wheelchair or on crutches. To reach for objects they normally cannot reach.

(narrator) The robot starts out as plastic sheet.

(Rus) We add a copper sheet, put it into an ink-jet printer, and print on it the circuit for controlling the device.

(narrator) With the circuits embedded into the plastic, a laser cuts out the robot's shape. Then it's folded into a 3-D form. It's "origami for techies." No glue, tape, or staples needed.

(male) Fold it into shape and it works.

(narrator) Add motors and sensors, and presto--a robot is born.

(Rus) At the moment, we add components by hand. In the future, we imagine automating that process.

(narrator) This one is called MIT Seg, after the Segway. It uses sensors to avoid obstacles. This printable flying robot is getting off the ground. It's a four-rotor helicopter.

(Rus) Give them to kids and let their imaginations run wild.

(narrator) They're also developing soft-bodied robots like this snake, and even a fish-- also inexpensive and easy to make. So maybe one day, when you need a helping hand, you might print up a quick bot to help you out. For Science Nation, I'm Miles O'Brien.

This project envisions a future where 3-D robotic systems can be produced and designed using 2-D desktop technology fabrication methods. If this feat is achieved, it would be possible for the average person to design, customize, and print a specialized robot in a matter of hours. This new project would completely automate the process, from sketches on-demand, anywhere, and with the skill of a team of professional engineers, leading to potential transformations in advanced manufacturing. The Computer Science and Artificial Intelligence Laboratory, known as CSAIL is focused on conducting groundbreaking research in artificial intelligence, computer systems, and the theory of computation, while also tackling pressing societal challenges such as education, health care, manufacturing and transportation. Part of the National Science Foundation Series “Science Nation.”