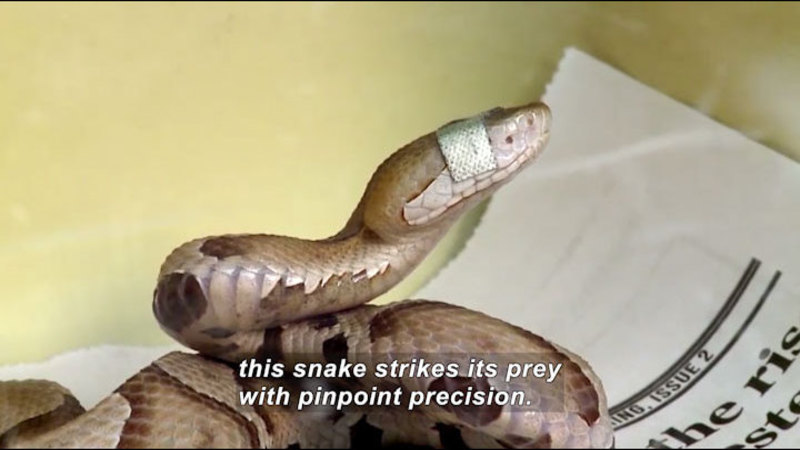 (Describer) Streams of light collide to create a globe filled with water. Title: Science Nation. In a box, a snake strikes a stick. Another strikes out.

(male narrator) Talk about a shot in the dark. Even with its vision blocked, this snake strikes its prey with pinpoint precision.

(man) This blindfolded snake can strike perfectly accurately based on its thermal sensation, its ability to detect a warm object in its environment. It is literally seeing heat.

(narrator) With support from the National Science Foundation, Florida Tech biologist Michael Grace and his team carefully study these reptiles' infrared sensors. This ball python, like most boas and pythons,

(Describer) He holds it.

has an array of these infrared sensory organs, called pit organs, right around the mouth. Their brains have an image of the visible world and an image of the thermal world. They see light and heat at the same time.

(Describer) Another snake strikes in its box.

(Grace) Our ultimate goal is understanding the workings of the system so that maybe you could build better artificial devices. We could truly revolutionize the way infrared sensors are used in industrial applications or police purposes or military purposes.

(narrator) These snakes aren't just sharpshooters. They're smart and can be trained to use their thermal sense to make choices and get rewards. Grace wants to learn how sensitive those heat-sensing organs are.

(Grace) They can be trained to do complex behaviors.

(narrator) In this game show for snakes, this Burmese python must pick a door based on whether or not it senses heat.

This animal has been trained, when a thermal stimulus is on, to choose the left button. It's made the correct choice and is retrieving its dead mouse reward.

(narrator) Better understanding of these snakes' thermal-sensing skills could help authorities manage them in places like the Everglades, where they are an invasive species.

(Grace) This exotic mega predator is a tremendous ecological threat. This infrared imaging system is one key to their success in the subtropics. People demonize snakes, but I love this animal. Looks like a big puppy.

(narrator) A puppy? Well, handle with care. These little cuties may not bark, but they definitely bite.

The goal of this research is to determine the mechanisms underlying predatory and defensive behavior guided by an extraordinarily novel sensor in snakes. Pit vipers, pythons and boas possess special organs that form images in the brain of the thermal environment, much like vision occurs in the human brain. Thus, these snakes see heat, and this amazing system is the most sensitive infrared detector on Earth, natural or artificial. A better understanding of infrared-based thermal imaging in snakes is important not only for understanding complex behavior in these highly efficient predators, but also for understanding the evolution of imaging sensors and the behaviors they support in other animals including people. Part of the National Science Foundation Series “Science Nation.”