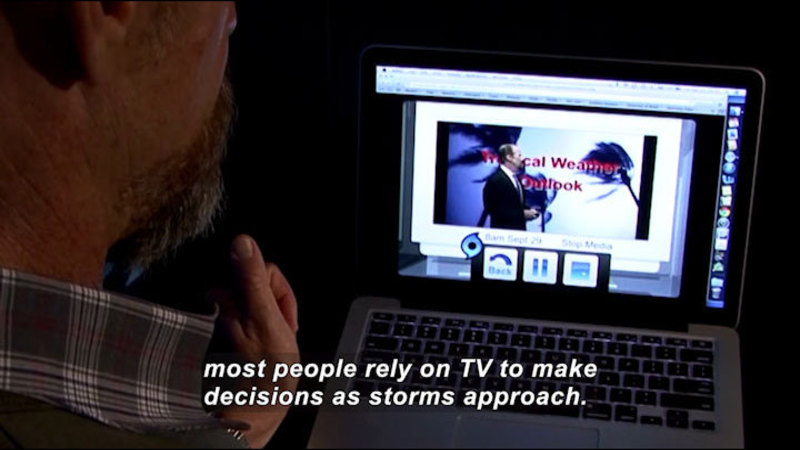 (man) This adventure stuff has a purpose.

(male narrator) Whether he is cave diving in dangerous and mysterious places or scoping out sea life in the Georgia Aquarium...

(man) They have some spectacular creatures here.

(Broad) Sometimes using cave diving as a metaphor can be effective with audiences who are drawn to the adventure.

(narrator) With support from the National Science Foundation, Broad and colleagues developed Stormview, an interactive computer simulation to analyze how people prepare for another risky event, an approaching hurricane. We're in someone's living room where they can choose Web reports or get a television broadcast.

(Describer) On a computer...

We've got a new tropical storm.

(narrator) In Stormview and real life, most people rely on TV to make decisions as storms approach.

(Broad) They can call neighbors. I'm probably not going to pay attention until it gets closer. Then we ask questions. If Gabrielle were a real storm, would you take actions? One of the difficulties with studying hazards like hurricanes is we get few chances to study them. That's why simulations are great.

(Broad) We experience risk as humans emotionally. Scientists have trained their minds to think about certain things analytically.

(narrator) Broad's team uses Stormview, which is supported by NOAA, to better understand people's decision-making process in the face of risky weather. The goal is to craft more effective hurricane warnings and to develop new tools to study human responses to warnings about other natural disasters, such as earthquakes and wildfires, and educate the public about environmental risk, like threats posed by climate change and water pollution.

(Broad) We need to get people to understand what's going on with our world. Do we need another study that tells them fish are in danger, or can you engage them?

StormView™ is a software program that gauges how residents of hurricane-prone regions might react in the event of an imminent storm. It was developed by University of Miami professor Kenny Broad and a number of collaborators, and supported with funding from the National Science Foundation and the National Oceanic and Atmospheric Administration. It includes TV meteorologist broadcasts, newspaper stories, web stories, bulletins from NOAA and even interactions with neighbors. The StormView™ simulation provides a way for social scientists to collaborate with meteorologists to tailor more effective messages. Part of the National Science Foundation Series “Science Nation.”