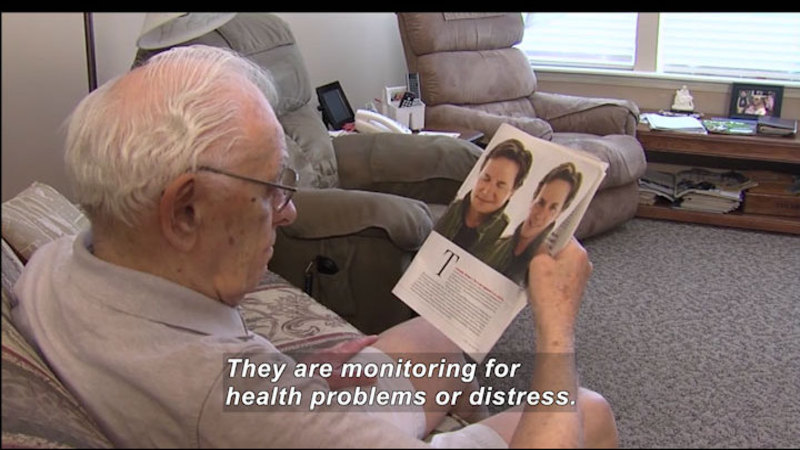 (Describer) Streams of light collide to create a globe filled with water. Title: Science Nation. An elderly man gets out of a chair.

(Describer) One of his shoes has a much thicker sole.

The thing that bothers me now is my gait has been altered. I'm a little shaky.

(male narrator) When George Haige walks around his apartment, sensors track his every move. Not his face or his identity, just his movements.

(Describer) On a graph, a blue figure walks.

We have passive infrared motion sensors that are scattered around the home.

(narrator) Haige is one of several residents at the Senior Living TigerPlace Apartments in Columbia, Missouri, where they're testing whether these sensors can help solve an age-old, old-age problem.

The goal is to keep people in their own homes as healthy, independent, and functional as possible.

(narrator) With support from the National Science Foundation and a White House initiative called U.S. Ignite, computer engineer Marjorie Skubic and nursing professor Marilyn Rantz at the University of Missouri are using next-generation, high-speed networks to remotely pinpoint subtle changes in an older person's everyday movements. They are monitoring for health problems or distress.

If I fall here, they'll know somebody's on the floor.

(Skubic) So the hydraulic bed sensor fits underneath the mattress, so it's completely noninvasive.

(narrator) They're testing sensors under the mattress to measure a sleeper's heart and breathing rate.

(Skubic) He wakes up and goes to bed at the same times every day. He has a consistent schedule.

(narrator) Once a pattern is established...

(Skubic) Changes in the sensor data patterns may correlate with changes in health.

(narrator) If there's a change, an e-mail alerts a caregiver, and a nurse contacts the resident. It could be a change in bed restlessness

or their heart rate overnight or their respiration.

(narrator) For example, frequent trips to the bathroom could indicate a urinary tract infection.

(Rantz) Problems are easier to solve when it's early. Infections in older people often lead to sepsis. That's a blood infection. That leads to an ICU stay... or death.

(narrator) Skubic expects this technology to reach the market soon, and not just to keep tabs on the elderly. She says it will be available to anyone with a chronic health condition who would like extra monitoring at home.

People are living longer and they desire to live as independently as possible in their senior years. But, independent lifestyles come with risks, such as debilitating falls and deteriorating health resulting from inadequate care. To address these issues, researchers are developing smart home technologies to enhance the safety of residents and monitor their health conditions using sensors and other devices. Part of the National Science Foundation Series “Science Nation.”