Science Nation: Someday We May Fill the Tank With Fungi Fuel 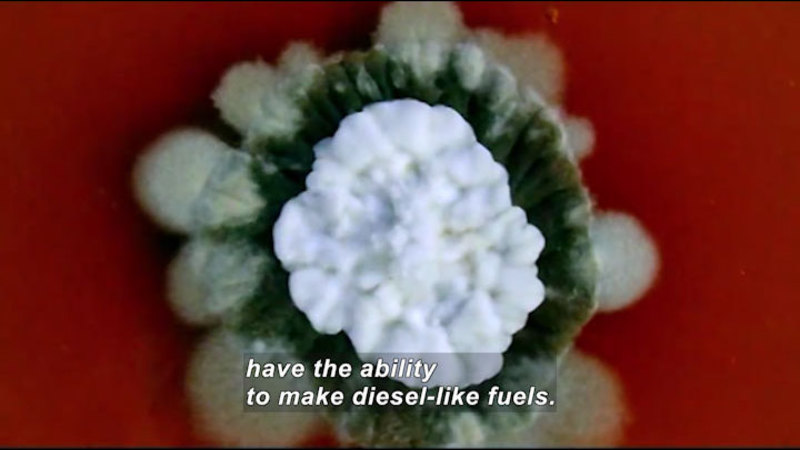 (Describer) Streams of light collide to create a globe filled with water. Title: Science Nation. A man is shown a tall, thin tree.

(male) Yes, small round leaves. Tell us about how it's used for women's medicine.

(male narrator) Over his 50-year career, Montana State University plant pathologist Gary Strobel has traveled to all seven continents collecting samples from remote, sometimes dangerous places. Ah, this should be good. It's got nice fleshy tissue.

(Describer) He cuts open a stalk.

(narrator) With support from the National Science Foundation, Strobel and colleagues have also discovered that certain organisms within plants called endophytes have the ability to make diesel-like fuels.

(Strobel) Endophytes are microorganisms-- bacteria, fungi-- that live within the living tissue of a plant.

(narrator) One hydrocarbon-producing fungus comes from the omo tree of Patagonia. Another is a citrus fungus from Florida. Okay, bud.

(Describer) Strobel and another man work in a lab.

(narrator) Strobel and engineer Eric Booth showed us how they make the diesel-like fuel, putting the citrus fungus in a paleobiosphere. The idea is to mimic and simulate important parameters from an ancient forest-- water circulation, air circulation--

into something we can use in the laboratory.

(Strobel) You see the fungal growth

(Describer) Strobel points inside the container.

as it has started to decay the leaf material?

(narrator) It takes Mother Nature tens of millions of years to turn organic material into fuel. Strobel and Booth can make a small amount in three weeks using the paleobiosphere. The fuel is the real thing. We can tell if hydrocarbons made today are identical to ones made then.

(Strobel) The fungus does not require sugar, starch, corn to grow. It'll grow on leaves. A given amount of plant material.

(Describer) It runs a tiny machine.

(narrator) In addition to fuel and medicine, Strobel says fungal products could also be useful in plastics and green chemicals. All from a little endophyte. That's music to the ears of this plant pioneer.

Montana State University plant pathologist Gary Strobel travels the seven continents to collect samples of endophytes. Endophytes are microorganisms that live within the living tissue of a plant. With support from the National Science Foundation, Strobel, engineer Brent Peyton and their team, have discovered that endophytes have the ability to make diesel-like fuel. And, amazingly, it takes the team just a few weeks to create the fuel. Part of the National Science Foundation Series "Science Nation."